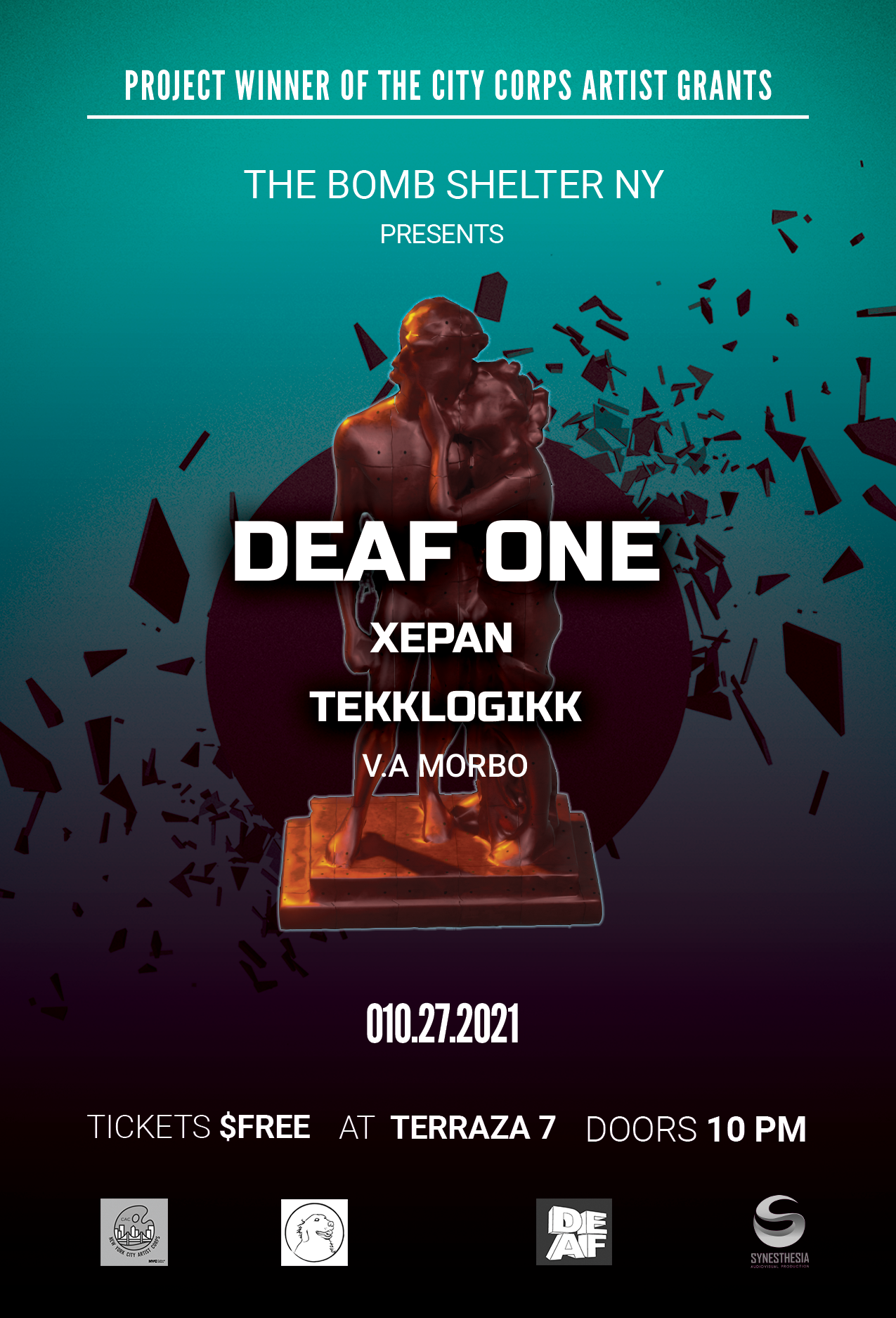 VJ AND DJ INTRO WORKSHOP / Project Winner of the City Corps Artist Grants
Presented by Terraza 7 (Indoors)
Wednesday, October 27th, 2021 at 10:00 pm.
NO COVER.
Concert Sponsored by #CityArtistCorps.
Featuring:
DJ Mixing DEAF ONE
VJ MORBO.
A night of music presented by The Bomb Shelter Ny a collective of DJ’s and Producers based in New York City.
On this occasion we will have a live streaming concert with an Audience from New York City, we bring you the best and most selective music with an amazing stage design that will blow your mind, In partnership with Terraza 7 one of the staples of live music in Queens, we have created an intimate show for a new type of audience, listen to some classics and some new and radical sounds, let your mind and eyes wonder in the diversity of the music and the amazing projection mapping and L.E.D visual show created for you.
XEPAN
Mauricio A.K.A XEPAN, The project was born in 2010 with the name The Voodoo Noise from the hands of Mauricio Suaza is a sound engineer and producer from the city of Medellin, with a number of investigating new compositional methods through programming and synthesis
of sound, initially focusing on sound design and musicalization to audiovisual media. Over time a place in the electronic scene opened “underground” of the country, and in cultural spaces and festivals that allowed the inter performance of experimental electronic music.
TEKKLOGIKK
Bryan Arango (TEKKLOGIKK) is a DJ based in the Tri-state area in New Jersey USA. His djing passion came when he lived in Europe and fell in love with techno. His passion has made TEKKLOGIKK start producing music as well and playsets for @thebombshelterny and @digitaldistrictevents. Also, there’s a song called meditation on the way to be on the lookout!!!
Raphael Guzman was born in Bogota and raised in Queens. Here in between two worlds is where you will find Raphael. Mainstream and Underground, Dark and Light, Space and Structure. Memories of Colombian mountain landscapes and graffiti stricken trains of the NYC subway system, always intrigued the student of sound and music. Hip Hop and DJing came naturally, growing up in the Golden era of Hip Hop and the late 90’s rave scene, Raphael took an interest in the turntable and the synthesizer. This led to a connection with John Hubela and CDJ Music, a mobile DJ company in the year 2000. Providing the music for Private events throughout New York in places like Windows on the world, Le Cirque and Studio 54, several residencies including, Club Spy , Hypnotic and Mustang , Raphael began to DJ and produce music as DEAF.
In 2010 Raphael began doing events with the Bogota Project collective, touring Colombia playing selective UK Bass Music. In 2018 Raphael began working at The Bomb Shelter NY. A production house to several artists with its home base in Long Island City. During 2020 DEAF presented songs from his unreleased album Love & Drugs live streamed on Youtube with visual work from VJ Morbo.
The music tonight is a part of a collection of songs produced by DEAF at Skylab Studios and The Bomb Shelter Ny. Using hardware and software, DEAF creates music by layering sounds using the electronic palette. A crossroad between Synth Pop, Trip Hop, Dubstep and Jungle. A introspective soundscape over a Dance element, DEAF’s music comes from growing up between the two worlds of Colombia and New York City. This is the DEAF RUSH!
STAGE DESIGN AND VISUALS
Leonard Arango a.k.a Vjmorbo @v.a_morbo
is the creative Director of Synesthesia Audiovisual, he’s a Visual artist with 10 years of experience participated in: third place Latin Dome Festival, Creative Coding Festival, samsara VR festival, Altavoz festival, and quality of education prizes(Medellín). Has also directed short films, music videos, and concept videos and done visuals for several electronic music legends like Technasia, Paul Ritch, Alirio Alicante, and many more.
+ Google Calendar+ iCal Export