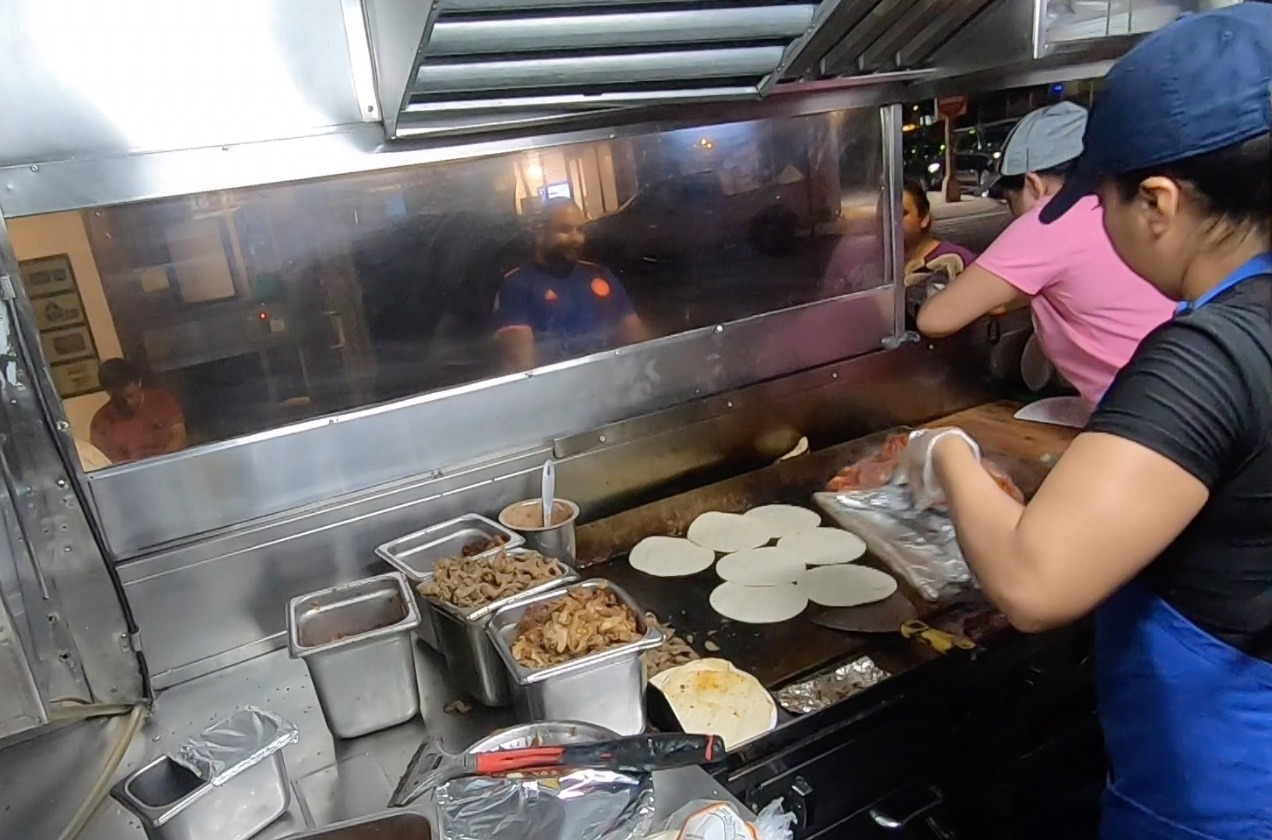 SMALL KITCHENS (28 mins. 2020) connects and contrasts work and food between a Mexican taco cart and a Nepali restaurant a few blocks from one another along the Jackson Heights-Elmhurst border under the 7 train, near Terraza. This observational tone poem rapidly intercuts between action in each place across an entire work day and night. Shot just prior to the Coronavirsus’s devastating arrival here, the doc now provokes questions about how life has and has not changed here across Covid Time. A grant from the Queens Council for the Arts funded by NYC’s Department of Cultural Affairs supported this film’s initial production.

SMALL KITCHENS] EPILOGUE (5 mins.) is a 2021 return to the two small kitchens observed in the original film as well as Terraza 7, where Small Kitchens previewed in 2019. It meditates on the resilience of Elmhurst-Jackson Heights’ immigrant-driven small-businesses and working-class society through Covid Time. Edited to renowned jazz combo Abare – Ari Hoenig + Chico Pinheiro + Eduardo Belo – performing Dizzy Gillespie’s “Woody ‘n You” at Terraza this past September.

OLMSTED & MOSES, AL & ME (short work-in-progress sample) maps the overlapping legacies of the 19th-century city Frederick Law Olmsted planned and the 20th-century one Robert Moses built in dialogue with the filmmaker’s life and work in Moses’s Queens and his childhood in Olmsted’s Brooklyn, where he grew up in a cityscape dominated by his father’s work as an Olmsted scholar.

About Seth Fein:
SETH FEIN is a filmmaker and historian who lives in Jackson Heights, where he operates Seven Local Film. He’s been a fellow in multimedia history at Harvard’s Charles Warren Center and grants from the National Endowment for the Humanities and the American Council of Learned Societies have supported his projects. In addition to making films, Fein has published widely about the audiovisual history of the Americas, and he’s taught history and film at Barnard, Columbia, CUNY, and Yale. He discusses how his filmmaking grows from his work as a historian, in an interview in Jump Cut.
A City Artist Corps Grant from the New York Foundation for the Arts and NYC’s Department of Cultural Affairs, assisted by the Mayor’s Office of Media and Entertainment and the Queens Theatre, supports this series
+ Google Calendar+ iCal Export