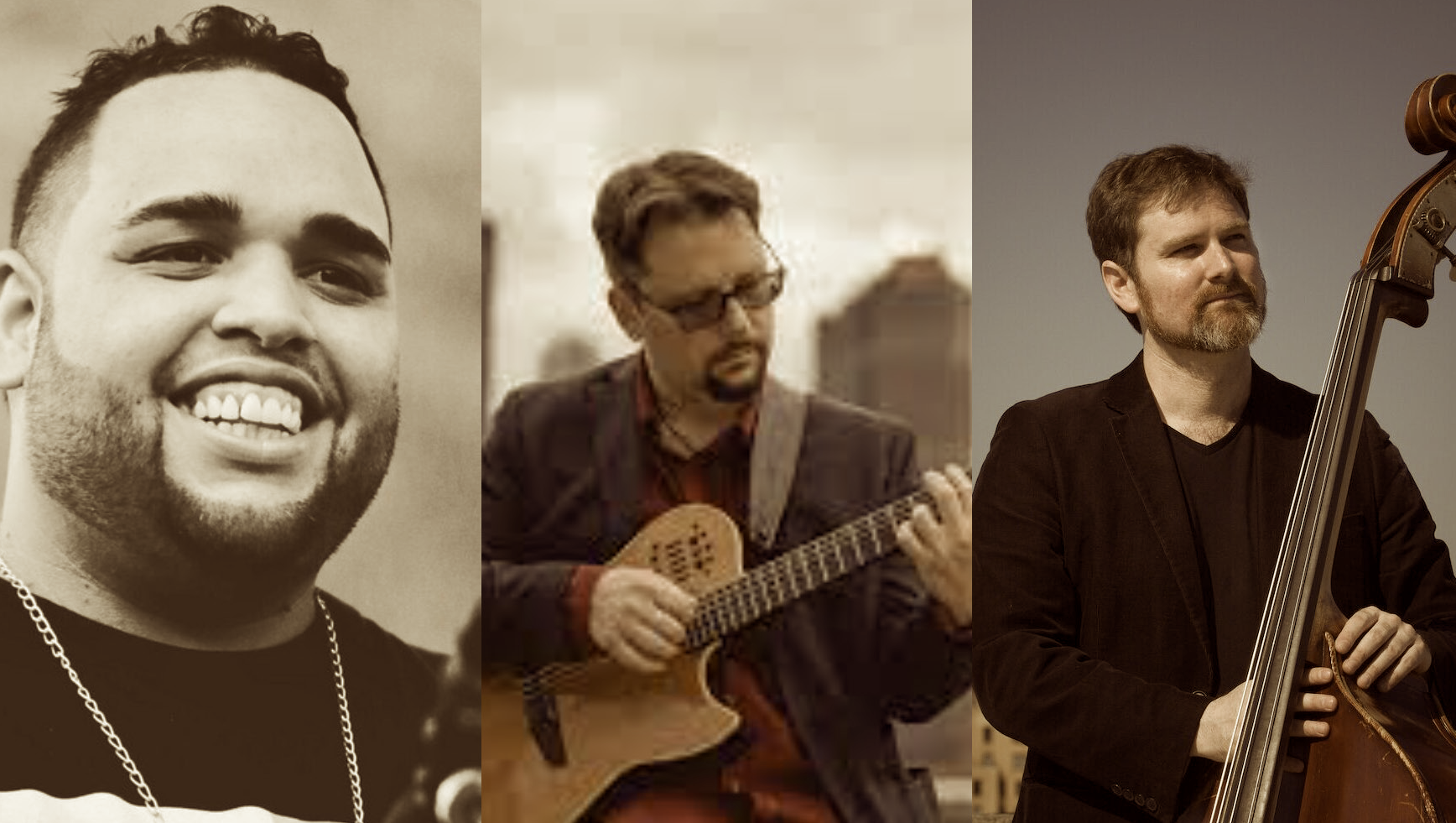 About Eric Kurimski:
Eric is New York’s most sought-after guitarist for Afro Peruvian music and a favorite at Terraza 7. In 2002, after years of studying and performing Jazz, he began intense research of Afro Peruvian rhythms with the esteemed guitarist, the maestro Carlos Hayre (Carlos has influenced and modernized the advancement of Afro-Peruvian music from the 1940s through the present day.) Carlos became Eric’s professor/ mentor and has proved to be very important to his musical career. Now, fusing his knowledge of Jazz with rhythms of Peru and Latin America, Eric has dedicated himself to defining a new sound integrating the Peruvian Cajon (box) as the principal percussion instrument in a Jazz setting. The spectacular playing and skillful blend of acoustic and electric tones bring authority to this brilliant co-mingling of (jazz and Afro Peruvian) traditions that are, after all, rooted in the same musical heritage.

About Edward Pérez:
Edward has performed with many of the greats in the Afro-Peruvian genre (Eva Ayllón, Chocolate Algendones, Juan Medrano Cotito, Sergio Valdeos, Chevo Ballumbrosio, Gigio Parodi, etc). Also known for his work as a jazz bassist, he has toured throughout the world, performing in many of the world’s foremost venues and recorded on a CD nominated for Grammy in the category of best Latin-jazz album.

About Jhair Sala:
A world-class and in-demand percussionist who regularly performs with the Pedrito Martinez Group. Sala unique style represents a new-school approach to Afro-Peruvian and Afro-Cuban musical styles.
When the Peruvian-born Jhair Sala was barely three-years-old, he sat with his father beating on wooden boxes known as Cajon. At that tender age, Sala inherent percussive talents were pushing through. His family moved to New Jersey when he was six, and his passion for percussion continued to grow.
Jhair Sala’s first teacher was Lucho Gomez, who taught him the proper finger, hand, and palm techniques for Cajon and other percussion instruments. During his teens, he performed with his mother’s band on The Mariela Valencia Show, which gave him an opportunity to travel all over the world and absorb a variety of cultures and musical traditions.
Once settled in the USA, Jhair Sala had the opportunity to study percussion with his idol, Pedrito Pablo Martinez. Under Martinez guidance, he absorbed Cuban music and gained fluency on congas, bongos, timbales, and Bata. Subsequent lessons with Roberto Chino Bolaños readied him for his first significant American appearance.