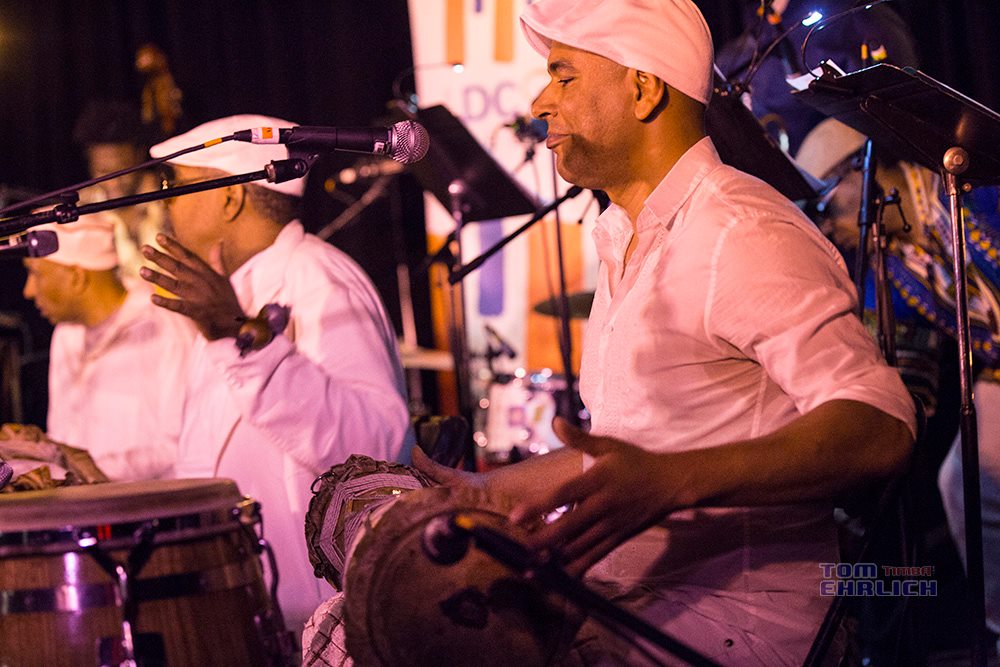 The Cuban Bata Trio of Felipe Lamoglia, Mauricio Herrera, and Manuel Valera mixes the sound and rhythms of the Yoruba tradition and especially the bata drums, with jazz and contemporary music.

About Mauricio Herrera:
Mauricio is from the eastern province of Holguin, Cuba. Their interest in music comes from the musical legacy of his family but He first entered the world of music was at age 7 playing violin, but by 14 began studying percussion where he found his niche. After graduation from the Jose Maria Ochoa Conservatory in Holguin, he began playing in various local popular and folkloric groups and was on faculty at Escuela Vocacional de Arte. In 1994 he moved to La Habana to broaden his horizons, where he played, toured, and recorded with several of the most prominent Popular bands in the Nineties in Cuba as Paulito FG y Su Elite, Manolito Simonet y Su Trabuco, Manolín el Medico de la salsa, Pachito Alonso y sus Kini Kini. Juan Kemmel y la Barriada, Hector Valentin, Angel Bonne., In 2001 he relocated to Mexico where he played with several projects including Otra Idea Orquestra, Amaury Gutierrez, David Torrens, and many others.

Mauricio Herrera Has Given Concerts and Master Classes in Different Music Colleges and Universities as, Boys & Girls Harbor, The Banff Centre in Canada, Berklee College of music, Yale University, Harvard University, Stanford University, JAZZUV University in Xalapa Mexico. and also performing around the World with Several major artists from the Scene of Jazz and other Musical Genres.

About Felipe Lamoglia:
Felipe Lamoglia is a Grammy Award-winner Artist, a Saxophonist, composer and arranger. Born and educated in Cuba, he started to play saxophone at the age of 8 years old at the Conservatory of Arts in HOLGUIN, with Alejandro Granado and Humberto Pino, he also studied during the middle School in Camaguey, with teachers Roberto Benitez and Alfred Thompson. Felipe went to the Superior Institute of Art (ISA) in Habana where he studied classical music with Miguel Villafruela. By the age of 18, he performed several gigs with Cuba’s popular band, NG La Banda.

In 1992 he moved to Brazil, where he lived for seven years and absorbed the country’s musical and spiritual wealth, playing with great artists such as Raul de Souza, Edsel Gomez, Cuca Teixeira, and others. He also played with trombonist Bocato, recording two albums and participating in the Montreux Jazz Festival on 1999. This same year Felipe relocated to the United States, where he immediately began performing with locals artist including few engages with the Band of the late Cuban idol Celia Cruz.

In 2001 Felipe began playing regularly with Arturo Sandoval’s Band, performing all over the world and recording different albums such as Trumpet Evolution, and two DVD releases: Live at the Blue Note NYC and Live at the Ann Arbor Summer Festival. He contributed as arranger, composer and co-producer for Arturo Sandoval’s Grammy- winning album Rumba Palace, released in 2008 by Telarc Records.

In 2009 he recorded with Eldar Djangirov on his album “Virtue” released by Sony Music, participating of several concerts at Blue Note Club and Clearwater Jazz Festival.

In January of 2013 Felipe performed at the Guzman Center for the Performing Arts at The University Of Miami, Together with The Frost School Jazz Orchestra he played an original material all written by Mr Lamoglia.

That same year he participated as special guest at Manguinhos Jazz Festivals in Victoria Espirito Santos, and Amazonas Jazz Festival, both celebrated in Brazil, Also teaching and offering masterclasses.

In April 31/2014 Felipe traveled with his Quintet to Haiti International Jazz Day sharing the stage with Mr Paquito D’ Rivera, also on this year he recorded on the first solo album of Carlos Henriquez “The bronx Pyramid” , a talented bassist of Jazz at Lincoln Center Orquestra directed by Winton Marsalis.

About Manuel Valera:
was born in Havana, Cuba. Since 2000 he has lived in New York City, where he attended New School University. His playing is influenced by Bill Evans, Chick Corea, and Keith Jarrett, and he has worked extensively in the groups of Dafnis Prieto, Arturo Sandoval, Paquito D’Rivera, Brian Lynch, Yosvany Terry, Jeff “Tain” Watts, and Lenny White.
Valera’s first CD as a leader Forma Nueva was released in 2004. It features bassist John Patitucci, drummers Bill Stewart and Horacio “El Negro” Hernandez, and saxophonist Seamus Blake. Historia, Melancholia, and Vientos were released between 2005–2007, featuring drummers Antonio Sanchez and Ernesto Simpson, saxophonist Seamus Blake and Joel Frahm, bassists Ben Street and James Genus, and percussionist Luis Quintero. 2009 marked the release of Currents, a trio recording with Genus and Simpson and it was also Valera’s debut on the Maxjazz label.
After a hiatus as a leader, to focus on sideman work, in 2012 Valera released New Cuban Express with Yosvany Terry on saxophone, John Benitez on bass, Tom Guarna on guitar, Eric Doob on drums, and percussionist Mauricio Herrera.
This recording earned him a nomination for a 2013 Grammy Award in the category “Best Latin Jazz Album”.