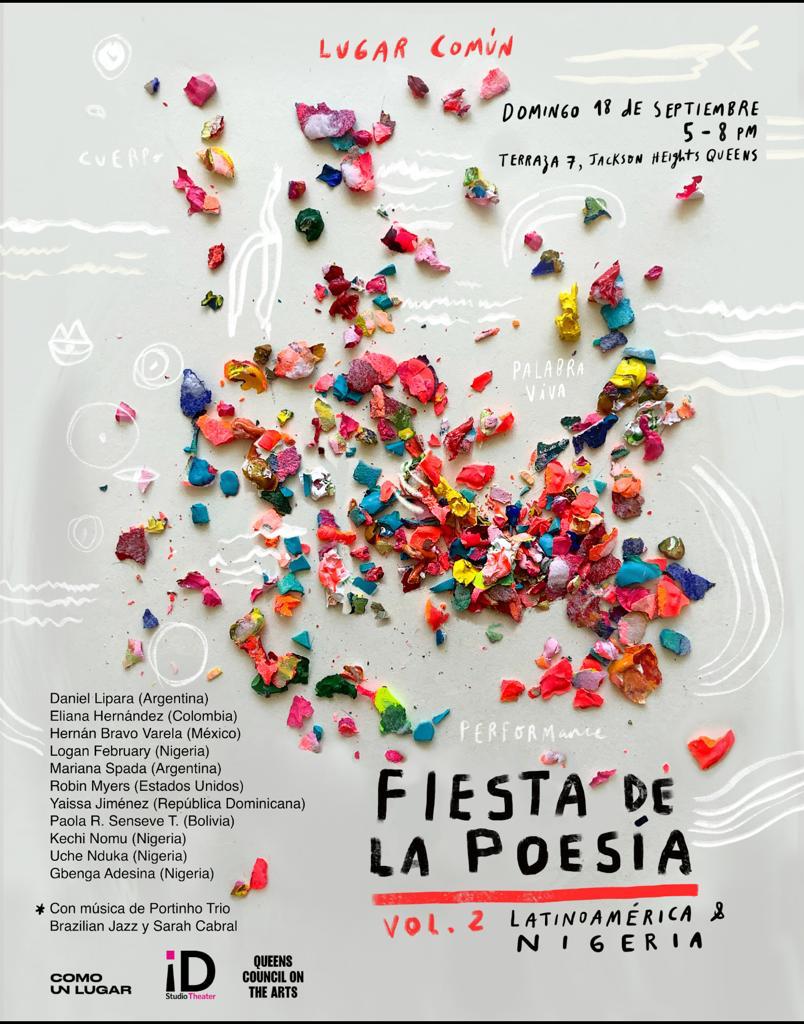 Lugar Común: Fiesta de la poesía Vol. 2 / A bilingual Poetry Festival
Presented by Terraza 7 Outdoors.
Sunday, September 18th, 2022, 5:00 PM
Event produced by Fátima Velez & Como un Lugar
Sponsored by the Queens Council on the Arts and ID Studio Theater.
NO Cover
Featuring:
Live music by Portinho Trio / Brazilian Jazz
And Sarah Cabral.
Live performances by Latin American and Nigerian poets.
Daniel Lipara (Argentina)
Eliana Hernández (Colombia)
Hernán Bravo Varela (México)
Logan February (Nigeria)
Mariana Spada (Argentina)
Robin Myers (Estados Unidos)
Yaissa Jiménez (República Dominicana)
Paola Senseve (Bolivia)
Lugar Común: Annual Latin-American Poetry Festival is a bilingual poetry, music, and performance festival produced by and for the Latinx and Latin American communities in New York City. With a lineup that includes poetry and music performances by ten Latin American and Nigerian artists, our festival seeks to create a space for poets and musicians to share their creative work, as well as to offer to the community a place to enjoy free live poetry, music, and performance. We hosted the first edition of Lugar Común: Annual Latin-American Poetry Festival at the Caribbean Social Club (AKA Toñitas), a legendary community center serving the Latin-American communities in East Williamsburg, Brooklyn, for over 40 years. This event featured 13 poets and musicians, and a diverse audience of approximately 120. This proposed second iteration of the festival will be hosted at Terraza 7, in Jackson Heights, Queens, and will feature poets and musicians from different countries from the Global South (Nigeria, Mexico, Colombia, Argentina, the Dominican Republic, Chile, and the United States). We see Lugar Común: Annual Latin-American Poetry Festival as an event that will enhance social change and community building in Latinx communities in Queens, and all around New York City. In order for our communities to enjoy the culture around poetry, we believe we must bring the poetry directly to the communities they live and work in, decentralized from its conventional venues, as well as from the traditional ways of presenting it to the public. Broadcasting the creative energy of poets, performers, and musicians, Lugar Común: Second Annual Latin-American Poetry Festival will be open freely to everyone who wants to enjoy an unprecedented live show.
About: Como un Lugar
We are a New York-based collective of Latin-American artists and public scholars who work cooperatively with other artists, both in the city and throughout the Americas. Our mission is to foster and share Latin American poetry through music and performance in areas with a high population of Latinx communities. We aim to create spaces for the Latinx community to meet and enjoy poetic expression through music and performances. By showcasing their work and sharing it with the community at non-traditional inclusive venues, we seek to empower each artist we work with and support them by paying fairly for their creative work, as well as to expand their public outreach and collective networks. As artists and public scholars, we firmly believe that the arts should be of and for the people, and that all communities should have universal access to them beyond a corporate or academic approach. We have already built a community of listeners through the bilingual podcast Orden de Traslado (A Call for Translation), which has put together a comprehensive network of young Latin American intellectuals and artists. We are convinced that making culture and the humanities more and more public and accessible will make them increasingly popular and have a positive impact in our bilingual communities and beyond.
For more information please contact:
colectivolugarcomun@gmail.com
@comounlugar
+ Google Calendar+ iCal Export