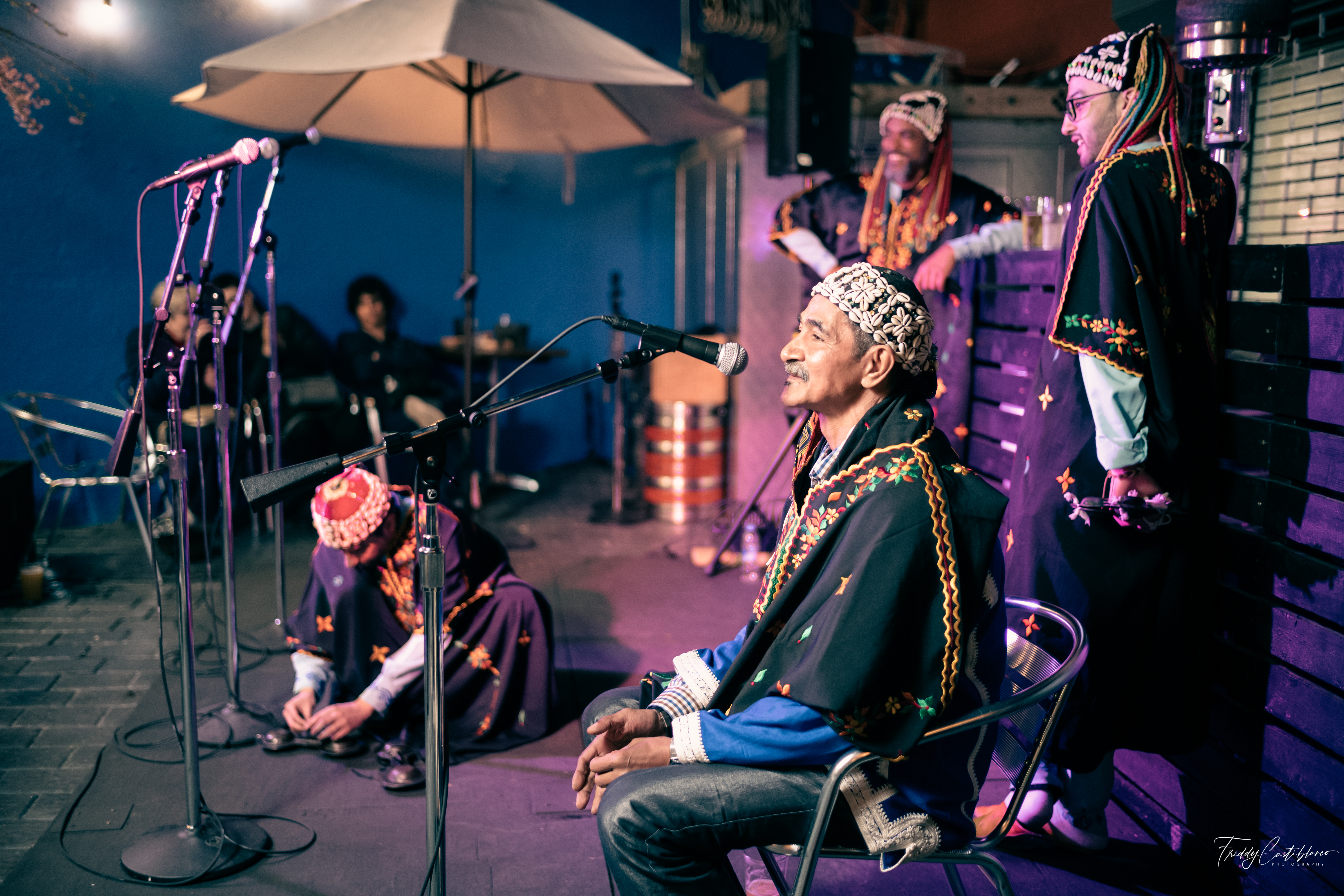 Moroccan night celebration by Innov Gnawa.
Presented by Terraza 7 Outdoor Concert Series.
Saturday, June 19th, 2021 at 7:00
$5: Cover Charge
Featuring:
Maalem Hassan Ben Jaafer / Sintir, Tbal, Lead Vocals.
Amino Belyamani / Karkaba, Backup Vocals.
Jainardo Batista / Karkaba, Backup Vocals.
Youssef Chehab / Karkaba, Backup Vocals.
Innov Gnawa is an NYC-based Grammy-nominated music group led by Ma’alem Hassan Ben Jaafer. The title Ma’alem, meaning master, denotes Ben Jaafer’s ancestral heritage of the musical tradition, which was passed down generationally within his family in Morocco. As the spiritual elder of the ensemble, he plays the three-stringed African bass or guembri. Ben Jaafer is accompanied by Amino Belyamani and Ahmed Jeriouda, along with a brotherhood of guest musicians, all playing the karkabas, metal castanets whose staccato sound is said to represent the shackles and chains of slaves.
Often referred to as “Sufi Blues,” Gnawa is rooted in Morocco’s ancient history. Over centuries, infectious rhythms and polytheistic spiritual beliefs originating from West African slaves integrated with Islam and the indigenous culture of Morocco, giving birth to a hybrid spiritual sect and musical community. The lyrics of Gnawa songs are actually prayers invoking saints and spirits for freedom and liberation. Like Blues music from the American south, Gnawa is revered and treasured throughout Morocco for its soulfulness.
Ma’alem Hassan Ben Jaafer was born in Fez in 1962. From a young age, he was immersed in Gnawa music and culture. His father Ma’alem Abdullah Ben Jaafer opened a zawiya, or a club for Gnawa musicians, where people serious about the heritage could come and learn, teach, practice, and share ideas freely. The zawiya provided constant enrichment and cross-fertilization that was invaluable in Ben Jaafer’s journey towards becoming a Ma’alem. A true Ma’alem not only needs to be a master of the music itself but also needs to master every facet of the tradition: crafting a guembri from scratch, hammering karkabas from raw metal, sewing costumes, learning regional repertoires including the Moroccan Jewish repertoire in dialects including Arabic and Bambara. He traveled with his father far and wide in the Maghreb, honing his skills until earning his title.
Since arriving in the city in the late 1990s and settling into a bustling Moroccan community in Brooklyn, Ma’alem hopped around between working at a bodega, a French café, and a furniture store, all while performing in clubs, restaurants, and his friend’s zawiya in the Bronx (affectionately referred to as “The Moroccan Clubhouse.”) With very few Ma’alems in town, he began to garner the attention of young Moroccan ex-pats, who started flocking to his practices and gigs. They formed a brotherhood of Gnawa musicians, including Samir Langus, who co-founded the band along with Amino Belyamani, Ahmed Jeriouda, Nawfal Atiq, Said Bourhana, and David Lizmi. Other musicians include Brahim Fribgane, Ahmed Ait Lafqih, Karim Ababou, Abderrahim Hakmoun, Mohamed Tibizi, Abderrahim Chalah, and Fehd Benchemsi.
Working during the day and performing in hip clubs like Nu Blu, Barbes, Tagine, and Zebulon at night, Innov Gnawa soon became a fixture in the global music tapestry of the city, and eventually graduated to festival stages all over the world. Over the years, Innov Gnawa played shows in many prestigious American venues, including Coachella, Terminal 5, Red Rocks Amphitheater, Lincoln Center, Music Hall of Williamsburg, and Brooklyn Bowl. In 2017, the band collaborated on a Grammy-nominated track with electronic music pioneer Bonobo. They caught the attention of various top-tier media outlets like NPR, WNYC (New Sounds Session), KCRW, and Brooklyn Vegan.
“The spirit of Gnawa is people.” – Ma’alem Hassan Ben Jaafer.
+ Google Calendar+ iCal Export