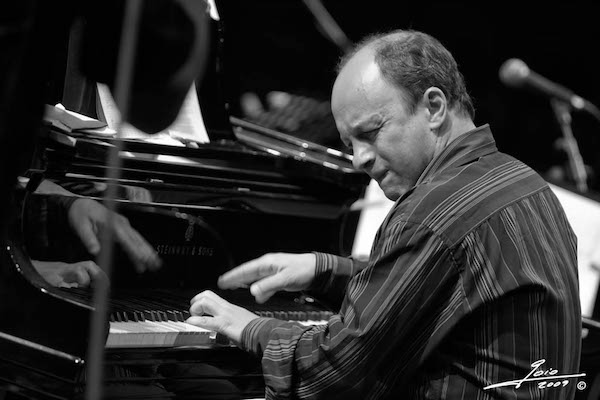 His performances were technically astonishing, showing great rhythmic, harmonic, and improvisational strengths, which few if any, could match. His melodic free form inventiveness and sense of time stood out like a free spirit seeking to liberate itself from all traditional constraints.” –Bruce Gilman, brazzil.com

A mix of straight-ahead and Brazilian sensibilities reflect Alves’ personal tastes and his musical complexity. “I love jazz, and I love Brazilian music, and I always try to open things up a bit by mixing the two together,” he says. “It’s good to be able to go back and forth, trading one of the other. It keeps things interesting.”

Helio was nominated for a Grammy with the album “Forests”, by the “Brazilian Trio”, a group that he co-leads with bassist Nilson Matta and drummer Duduka da Fonseca. He has released four albums under his own name: “Trios” (1998), “Portrait in Black & White” (2004), “It’s Clear” (2009) and most recently, “Musica”

Together with musical partner Maucha Adnet, Helio has released the piano-voice album “Milagre” on Zoho Music (2013).

“Alves has subtlety, musicality, and an extraordinary facility for improvisation…” “…exceptional melodic improviser…”

He was a teacher at the Drummers Collective and wrote an instructional book, Brazilian Rhythms for Drumset.

Since 1986, he has been a founding member and co-leader of Trio da Paz, a band he started with bassist Nilson Matta and guitarist Romero Lubambo.

Duduka is also a 4-time Grammy nominee. In 2002 his first solo album, Samba Jazz Fantasia, was nominated for an American Grammy Award.

Since 2007, Duduka Da Fonseca has had a project with pianist Helio Alves, featuring vocalist Maucha Adnet, called “Samba Jazz & The Music of Jobim”. This show has been presented annually at Dizzy’s Club Coca Cola (JALC), as well as other venues and festivals around the globe.

In 2009 Duduka formed the Duduka Da Fonseca Trio featuring David Feldman on piano and Guto Wirtti on acoustic bass. The Trio has recorded four albums that were acclaimed by critics worldwide.