Nilko Andreas “Back to the Roots” with Blanca Gonzalez Duo 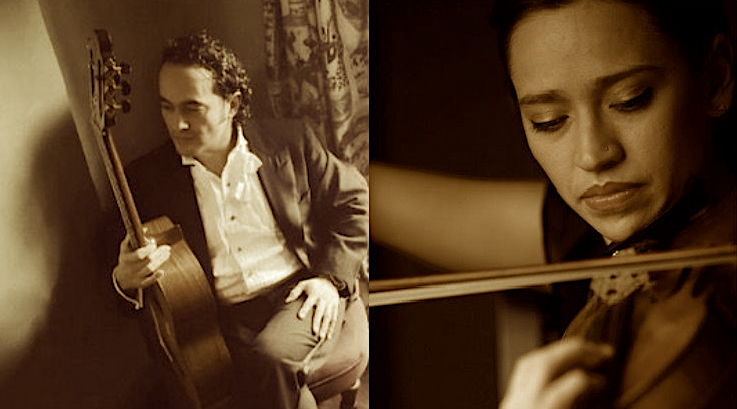 Nilko Andreas “Back to the Roots” with Blanca Gonzalez Duo

Blanca Cecilia and Nilko Andreas, will take you on a musical journey, where you will experience a taste of Colombian , Latin-American and European folk Music. The duo will share their knowledge of how traditional music has been an important influence and source of inspiration throughout the years and how the folkloric element has influenced the development of classical music.

Coming from Latin-America, the New York City based the duo will lead an interactive presentation that will focus on the exploration of sounds, rhythms, and melodies hailing from the Andes region in South America, as well as finding linear connections with other parts of the world with similar musical history. They will explore all of these musical elements with their violin and guitar, as well as their voices. The human voice and poetry, as well as instruments such as these are timeless and universal and play an important role in the evolution of our humanity.

Some of the composers you will get to know include: A. Piazzolla,(Argentina) B. Bartok, (Hungary), N. Paganini, (Italy), Jose A. Morales, Fulgencio Garcia, Nilko A. Guarin, (Colombia)

Renowned artists, Blanca Cecilia Gonzalez and Nilko Andreas Guarin, have been performing as soloists and chamber musicians in different stages around the world, and with different orchestras and ensembles. They have come together as a duo with the purpose of exploring and contributing to preserve this millenary, enchanting and intimate, nevertheless, humble music ensemble. Their repertoire consists of original and traditional music, from different parts of the world and different periods.
Since the beginning of their collaboration in 2017 they have been captivating audiences with their academic fidelity, unusual chemistry, and solid stage presence.

About Blanca Cecilia Gonzalez:
Colombian violinist Blanca Cecilia González has been making music for over 25 years, sharing her love and passion with audiences on stages across North America, South America and Europe. An avid and active collaborator and diversified player, her projects range from traditional classical to jazz, contemporary, rock, folk and world music. Blanca began traditional conservatory training at age four and made her debut as a young performer on Colombian National Television at the early age of 6. Her classical training began with Maestro Luis Maria Diaz with the Suzuki Method alongside Colombian traditional folkloric songs. Since making her homebase in New York City, Blanca has embarked on a musical journey exploring different styles of music and expression. She has won several competitions and awards and as a result has performed as a soloist with orchestras in New York and Philadelphia, including the Ambler Symphony, Queens College Orchestra, Philadelphia Orchestra Society, Jeunes Virtuoses de New York amongst others. Blanca holds a B.M. from the Aaron Copland School of Music where she focused her violin studies -for nearly a decade- with the violinist and pedagogue Arik Braude. She completed her M.M. in violin performance at the Juilliard School studying with Lewis Kaplan, and exploring contemporary music under the direction of Joel Sachs, orchestral performance under the baton of Alan Gilbert amongst others. Joined by her husband, pianist and Music Director of Postmodern Jukebox, Jesse Elder and Blanca founded the duo 1in2 and the ElderChild Inc. with the purpose of exploring musical styles while creating their own sounds blurring the lines of genres. Their projects have taken them across the country as a duo and within mixed ensembles collaborating with vocalists, dancers, acrobats and visual artists. Blanca newest musical exploration and collaboration with renowned guitarist Nilko Andreas Guarin is taking her back to her home continent, childhood and roots. As a five year participant of Alfred’s own MostArts festival, Blanca is honored and excited to share this musical adventure with the inhabitants of this beautiful region.

About Nilko Andreas Guarin:
Classical Guitarist, Singer and Composer Nilko Andreas Guarin has been praised as an “electrifying performer for his powerful stage presence and spontaneity that grows irresistible”. Since his Carnegie hall debut in 2009 Nilko Andreas has been captivating audiences in three continents as a soloist and chamber musician. Recipient of several awards including “The Recognition Award” by the city of New York for his contributions to the Arts. Born in Colombia Nilko Andreas has great interest for the composers of Latin America, constantly commissioning and premiering new works at his series “Amazonas” at Carnegie hall. He has given master classes in different universities around the world most recently in Seoul Korea and Budapest Hungary (2021), He has recorded music with multi-platinum artists and composed music for film and theater. He holds a BM and MM from The Manhattan School of music. Recently he performed “Concierto de Aranjuez” in China with the Shenzhen Philharmonic under Mto Henry Van de Velde, and at Unesco in Paris with the Prague Philharmonic. He is the Artistic Director at AZLO productions and the Latin-American Chamber Music Society of New York. www.nilkoandreas.com