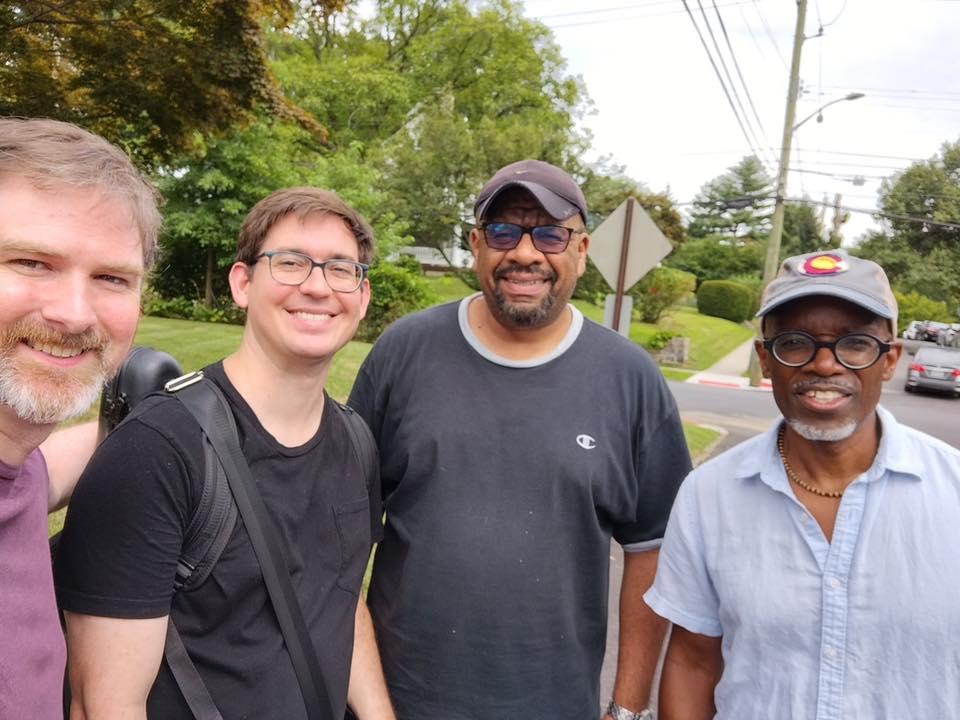 Edward Perez/Michael Thomas Quartet
Presented by Terraza 7
Tuesday, August 9th, 2022 at 7:00 pm
$15 Cover charge for Mezzanine
$20 Suggested donation.
Featuring:
Edward Perez/Bass.
Michael Thomas / Saxophone.
Luis Perdomo/Piano.
Rudy Royston / Drums
About Edward Perez:
Bassist and composer Edward Perez resides in Queens New York where he co-directs the Grammy-nominated Terraza Big Band and maintains a great number of musical collaborations in a myriad of styles. The early years of Perez’s career included stints in Boston and Lima, Peru, where he began his formation in jazz, latin-jazz, and Afro-Peruvian styles. Since arriving in New York in 2005, Pérez has toured throughout the world, playing bass for acclaimed band leaders in jazz such as Paquito D’Rivera, Ralph Peterson Jr, Afro-Latin Jazz Orchestra and Ignacio Berroa and even sharing the stage with jazz luminaries such as Lee Konitz, Kenny Werner, Lionel Loueke, Mark Turner, and Seamus Blake. Owing to the lasting influence of his years in Lima, he has performed with many of the greats of Afro-Peruvian music, including Oscar Avilés, Julio “Chocolate” Algendones, Juan Medrano Cotito, and Grammy winner Eva Ayllón. His unending curiosity in music has led him into collaborations with musicians from a host of other styles including Lebanese oud master Marcel Khalife, flamenco phenom Diego Amador, Colombian singer Lucia Pulido, and Galician gaita powerhouse Cristina Pato. Perez’s compositions and arrangements have been performed in venues such as Kennedy Center, David Geffen Hall at Lincoln Center, Massey Hall, Chicago Symphony Center, El Gran Teatro Nacional de Lima, Damascus Opera House, and Boston Symphony Hall. He currently continues to freelance, co-direct the Terraza Big Band, and arrange for Festejation, a New York based group playing Afro-Peruvian music.
About Michael Thomas:
Grammy-winning saxophonist, composer, and arranger Michael Thomas has been an active member of the New York City jazz community since arriving in 2011. Holding degrees from the University of Miami, New England Conservatory, and The Juilliard School, Michael has performed throughout the United States and abroad, including tours in Central and South America, Europe, Japan, and Russia. He has appeared as a sideman with Brad Mehldau, Dafnis Prieto, Nicholas Payton, Miguel Zenón, Etienne Charles, and Jason Palmer, and Michael’s talents can be heard on over 30 recordings. According to the New York Times, Michael writes “energetic, tuneful music for both combos and large ensembles”, and All About Jazz describes his playing as “a particular revelation, as he provides superb, well-crafted solos”.
Michael has been commissioned by school and professional ensembles throughout the United States and abroad, and he is currently a member of the BMI Jazz Composers Workshop in New York City. Since 2015, Michael has co-lead the Terraza Big Band, and the ensemble’s GRAMMY-nominated debut One Day Wonder, was released in May 2019 on Outside In Music. Michael’s work has been recognized by DownBeat magazine as well as the Keep an Eye competition in Amsterdam, NL, and in 2020 he was chosen by the USAF Airmen of Note as the winner of the Sammy Nestico Award. Michael also participated in the New York Youth Symphony’s First Music commission series in 2016, and he continues to work as an arranger and orchestrator for clients around the world. In addition to his work as a big band composer, Michael regularly leads his quartet, releasing the two-CD live album Event Horizon in May 2020 on Giant Step Arts. His follow up studio recording, Natural Habitat, was released in March 2021 on Sunnyside Records.
Starting in September 2018, Michael has been a faculty member at the University of Hartford’s Hartt School of Music as an Artist Teacher of jazz saxophone in the Jackie McLean Jazz Studies Institute.
Michael is a Boston Sax Shop performing artist.
+ Google Calendar+ iCal Export