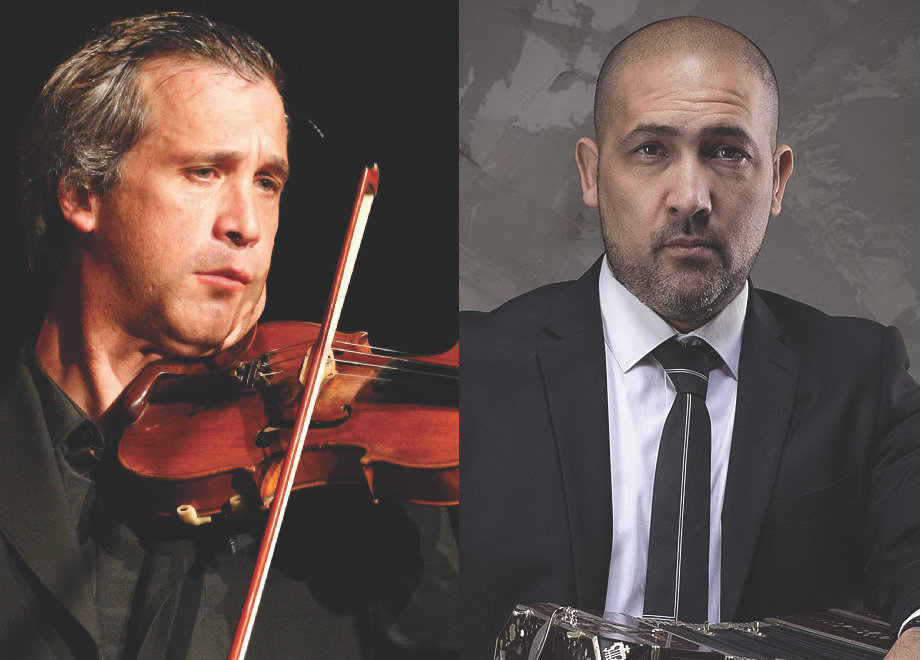 Bandoneonist, conductor and composer, Horacio Romo was born on October 30, 1973 in the city of Buenos Aires, Argentina. He began his bandoneon studies at the age of 9, encouraged by his father, a singer also known as Horacio Romo. His virtuosity quickly made headlines and at the age of 11 he was hired by the municipality of Lomas de Zamora, the city where he grew up and currently resides. His passion and talent for tango meant that before the age of 15 he was chosen to accompany great singers such as Alberto Castillo and Roberto Goyeneche. Bandoneonists Leopoldo Federico and Osvaldo Piro have greatly influenced Horacio’s career, making him a versatile artist with both power and subtlety. Horacio has been a member of orchestras such as the Juvenil del tango, Orquesta Gran Debut, and Orquesta Color Tango, with which he performed around the world for 9 years. He has been a member of the Fernando Suárez Paz Quintet, the Astor Piazzolla Foundation Quintet, the Leopoldo Federico Orchestra, the National Tango Selection, and the orchestras of Julián Plaza, Osvaldo Berlingieri, Horacio Salgán, Antonio Agri, Atilio Stampone, Raúl Garello, Rubén Juárez, Osvaldo Piro, Gustavo Beytelman, Cristian Zárate and Pablo Agri. He was director and first bandoneon of the companies “Tango Argentino” and ̈Tango Pasión. ̈ He performed the opera “María de Buenos Aires” in Poland and was part of the opera “Orestes, last Tango”, which toured Holland and Belgium. He has accompanied important tango singers such as: Roberto Goyeneche, Alberto Castillo, Alberto Morán, Alberto Ruffino, Rubén Juárez, Guillermo Fernández, Raúl Lavié, María Graña and Elena Roger among others. He toured several countries with the show “Boccatango,” directed by the legendary Argentine ballet dancer, Julio Bocca. He also accompanied international artists such as Julio Iglesias, Luis Miguel, Laura Pausini, Ricardo Montaner, Marco Antonio Solis, La India, Diego El Cigala and Buika. He participated as a session musician in more than a hundred albums of national and foreign artists, including the album Café de Los Maestros and albums of the orchestras he was part of. He worked with the maestro and director Lalo Schiffrin and participated in the music of the film “Tango” by Carlos Saura. He participated in the documentaries “Café de los maestros” and “Si sos brujo”. For four years he was assistant bandoneon teacher at the Orquesta Escuela de Tango directed by maestro Emilio Balcarce. He made his debut with his group Horacio Romo Sexteto, at the Luna Park in the final of the World Cup and Tango Festival 2015 along with Raúl Lavié, and toured with the same group in 2017, performing in 25 different cities in Japan. Due to the great success of the tour, he recorded his first cd that same year and it was the best-selling tango album in that country. As a soloist he has performed Astor Piazzolla’s Concerto for Bandoneon and Orchestra with the Los Angeles Philharmonic, playing at the Hollywood Bowl and Walt Disney Concert Hall (for which he won an Emmy Award for Best Latin Concert), Eugene Oregon Symphony, and Texas Fort Worth Symphony. In other countries: BBC Philharmonic playing at the Albert Royal Hall (England), Auckland Philharmonic (New Zealand), Lima Symphony (Peru), Moravia Symphony (Czech Republic), Porto Alegre Symphony and Rio Philharmonic (Brazil). He is currently a soloist with the Orquesta Nacional de Música Argentina Juan de Dios Filiberto, first bandoneon in the orchestras of José Colangelo and Nicolás Ledesma (winner of a Grammy). He is the musical director and first bandoneon of the company Forever tango, a show with the same name that tours the world. Since 2005 he is also the musical director and first bandoneon of Sexteto Mayor, the legendary orchestra with more than 45 years of experience (winner of two Gardel awards). In addition, he returns to perform Piazzolla’s concerts for bandoneon and orchestra and to work in duo with violinist Pablo Agri.

Violinist Pablo Agri has performed as soloist in several international symphonic and chamber orchestras. He has played with many of the most important tango musicians: Mariano Mores, Néstor Marconi, Horacio Salgán, Julián Plaza, Susana Rinaldi, Osvaldo Berlingieri and Juan José Mosalini, among others. In 2012, his sextet was nominated for the Gardel Award as best Tango group. In 2014, he was named Outstanding Personality of Culture of the City of Buenos Aires. He has participated in the recitals and recording of the CD Cigala Tango, along with Diego El Cigala, Latin Grammy Award-winning album. In 2018 he starred alongside Eduardo Walczak in the documentary “Walczak Agri, violinists”, produced by The Argentine Tango Society. He is currently the conductor of the Camerata Argentina and the orchestra of the TV Pública program “La hora del tango” and is a member of the Orquesta Sinfónica Nacional and the Sexteto Mayor.