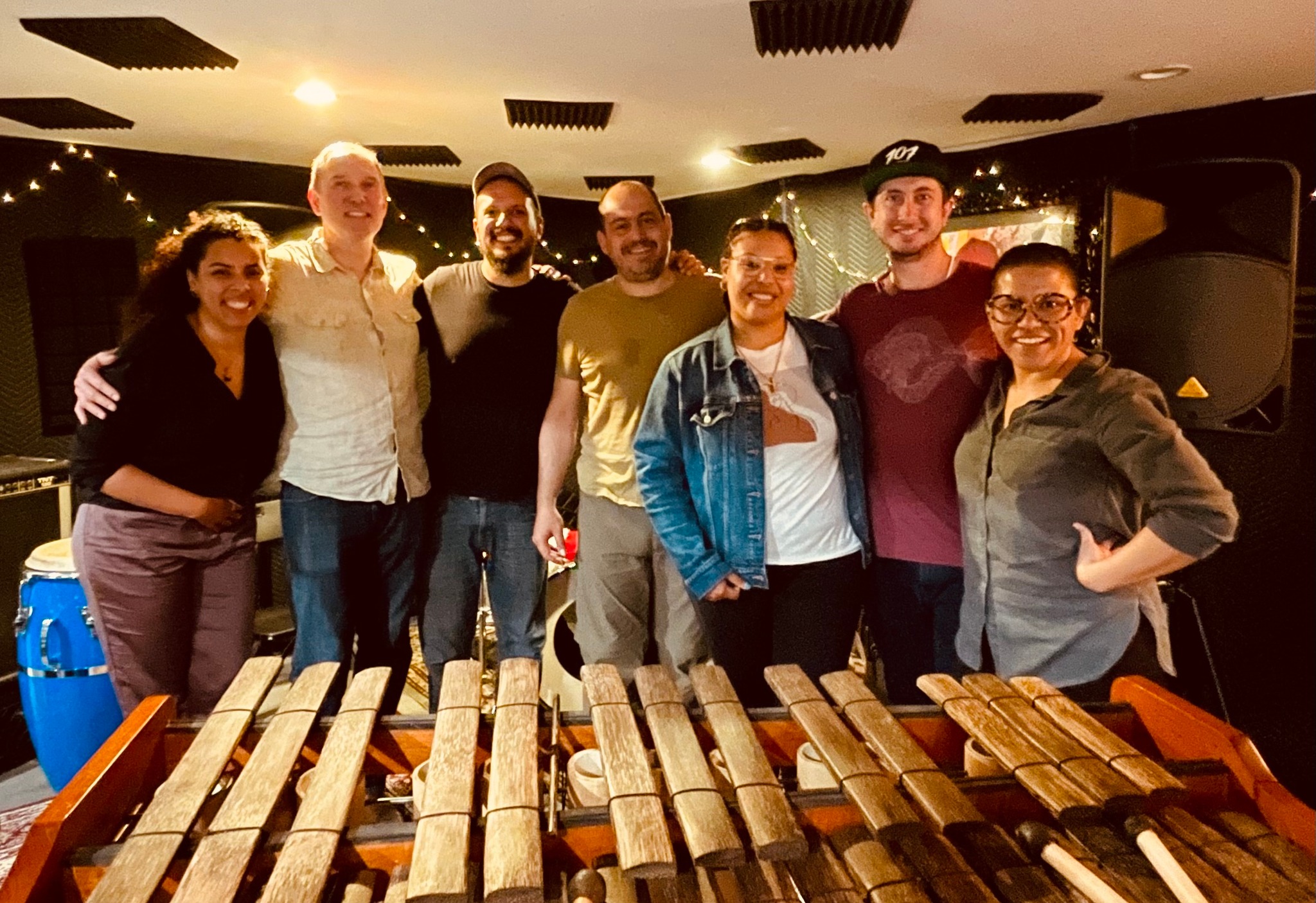 “Balsa de Fuego”  / Colombian world music
Presented by Terraza 7.
Tuesday, November 15, 2022 at 9:00 pm.
$15: Cover charge for mezzanine.
Featuring:
Justin Flynn / Saxophones .
Melissa Baena / Trombone .
Daniel Neville / Marimba; vibraphone.
María Fernanda González / Bandola .
Erica Parra / Tambor Alegre .
Andres Fonseca / Drums .
Juan Sebastián Monsalve / Bass Guitar and direction.
“Balsa de Fuego” gathers the Caribbean Cumbia; the Joropo from the Colombo-Venezuelan plains; the Currulao from the Colombo-Ecuadorian Pacific coast; and the jazz from North America.
This new project lead by Colombian composer Juan Sebastian Monsalve (known as one of the precursors of the New Colombian Music with his band Curupira) assembles a diverse range of musicians from the New York music scene, achieving a powerful contemporary sound with strong roots in tradition.
About Juan Sebastian: Juan Sebastián, a bass player from Bogotá, is a crucial figure in the history of jazz made in Bogotá. To review the biography and musical career of Monsalve is to go through a good part of the historical development and growth of the Bogota jazz scene of the last quarter of a century.
He has passed through the Jazz al Parque stage with several emblematic groups, such as the Tico Arnedo Quartet, María Sabina, and his own projects, such as Curupira and Juan Sebastián Monsalve Jazz Cuarteto.
He has also collaborated with great international jazz references, such as Anat Cohen, Sofía Rei, Jeff Ballard, and Jason Lindner. His versatility has allowed him to move easily through musical universes other than jazz, such as punk, rock, academic music, rap, music from India and the vast spectrum of Colombian folk music.
In the 2000 edition of Jazz al Parque, he met the musicians with whom the conditions were given to shortly after record in New Jersey a key and revealing album in the Colombian jazz discography: El Bunde Nebuloso. For 20 years he has been the director and bassist of the Curupira group, the forerunner of new Colombian music.
He has participated as a composer, producer, arranger, bass player and soloist guest in projects such as: Susana baca (Peru), Sofía Rei ( Argentina), El Kanka (Spain), Tita Parra (Chile), Dora Juárez (Mexico), Jason Lindner (USA,) Kraken, 1280 Almas, Andrés Cabas, Maía, Carlos Vives among others
+ Google Calendar+ iCal Export