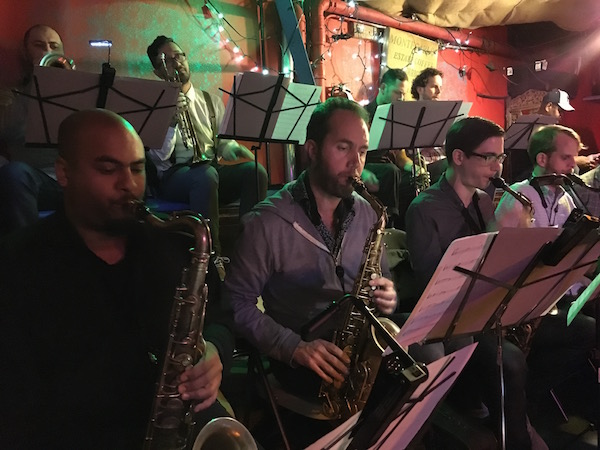 The Terraza Big Band is an 18-piece ensemble based in Queens, NY, and performing monthly at Terraza 7 in Jackson Heights. Under the direction of co-directors Michael Thomas (saxophone, composer) and Edward Perez (bass, composer), this group performs a repertoire of original music penned by its leaders. The Terraza Big Band features many of New York’s most in-demand jazz musicians and can be heard at venues throughout New York City in addition to its residency at Terraza 7. In December 2017, the band recorded its debut album, scheduled for release later this year. For more information about that project or other upcoming events with the band, please visit their website at www.terrazabigband.com.

Award-winning saxophonist and composer Michael Thomas have been an active member of the New York jazz scene since arriving in 2011. Over the last several years, he has performed or recorded with Miguel Zenón, Nicholas Payton, Jason Palmer, Wayne Shorter, and Gunther Schuller, among many others. In addition to being an in-demand saxophonist and woodwind player, Michael is also very active as a composer and arranger. His 2011 quintet album “The Long Way” features all original music, and Michael’s arrangements have been commissioned and recorded to international acclaim, including a 2016 First Music commission by the New York Youth Symphony Jazz Ensemble.