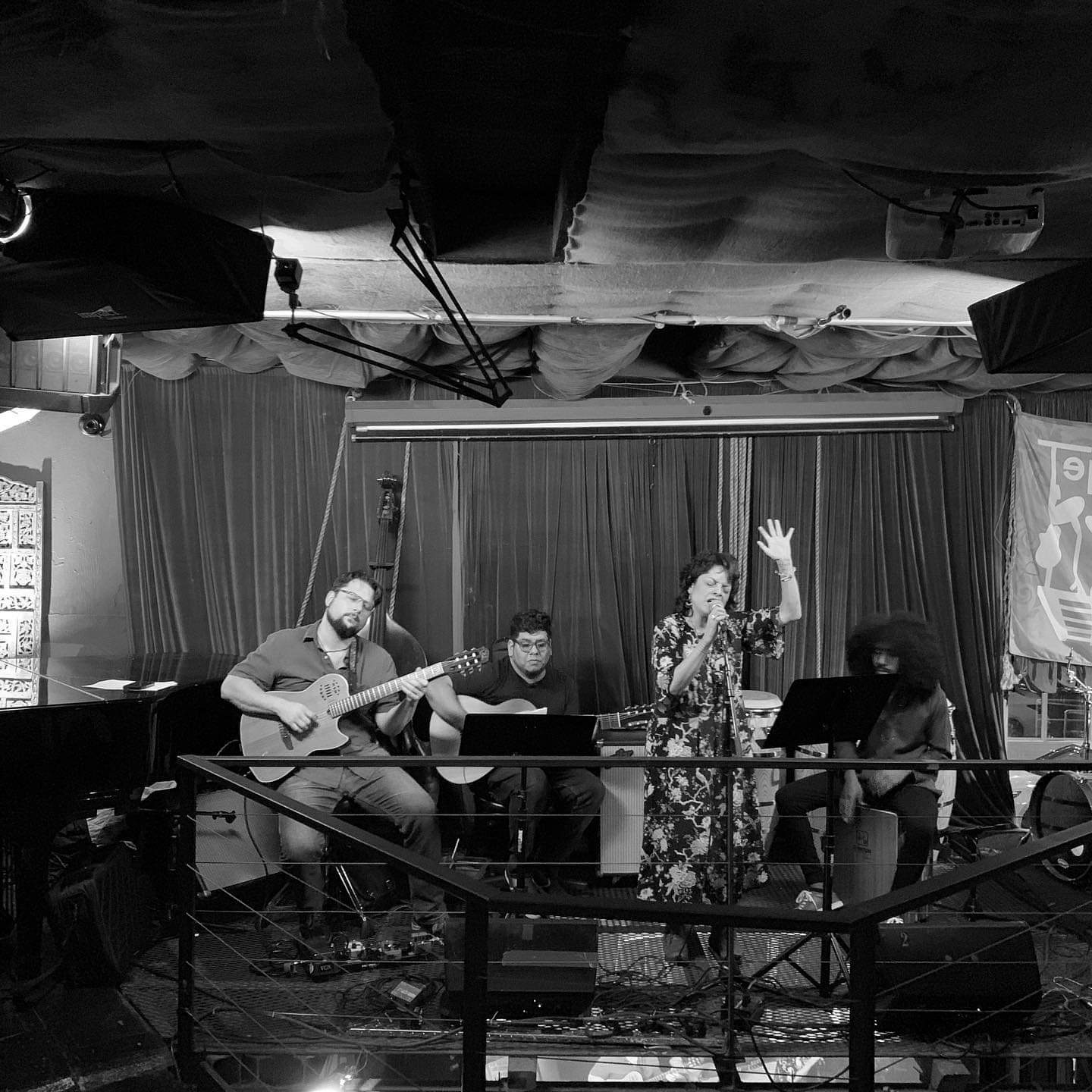 Sara Van, Kurimski, Cuba & Isla at Terraza 7 on Tuesday, August 27th, 2019, at 9:00 pm.
$15 cover charge for mezzanine. FREE admission for CHILDREN 12 and under.
Featuring:
Eric Kurimski / Guitar.
Alvaro Isla / Cajon.
Mario Cuba / Bass.
Sara Van / Voice and compositions.
The Peruvian born singer who resides in Spain since childhood integrates a fusion of poetry and postmodern raw emotion that is simply extraordinary.
She builds a musical garden with the sounds that tell the truth. Her heart and core are Peruvian, nonetheless, as a citizen of the world, she has drawn upon multifarious sources from chanson and tango to folk and hard rock.
Her words and broken honesty won her a Latin Grammy award pre-selection for “Talitá Kum”, her first album. Her lust for verity has since marked her style, leading her to collaborate with a diversity of renowned artists both in Europe and South America.
She stars in the acclaimed music documentary “Sigo Siendo” (dir. Javier Corcuera), where her performance of Chabuca Granda’s classic “Cardo y Ceniza” earned her international recognition. She has also performed the lead vocals for the soundtrack of the Spanish film “Puñado de Besos” (dir. David Menkes / mus. Paco Ortega), as well as the emblematic Peruvian song “El Hombre” in “El Viaje Macho” (dir. Luis Basurto). Her vocals in the play “El Loco de Los Balcones” (writ. Vargas Llosa / dir. Gustavo Tambascio) are also to be noted.
Her participation in the revolutionary opera project “A Lyrical Van”, together with maestro Bruno Tambascio, won praise from conductor Daniel Barenboim; and the lyrics and vocals she lends in “Guarida” for the cutting-edge tropical bass duo “Dengue Dengue Dengue”, were described as “captivating” by Billboard Magazine.
With a new album underway and her groundbreaking success as an independent artist and performer, Sara Van’s highly contagious passion for life continues to mesmerize her audiences around the world, bringing an indie torch of flame to the ancient soul of Latin lore.
Now, for the second time in NYC, she shares the stage with well-known guitarist Eric Kurimski, protegé of the esteemed Peruvian master Carlos Hayre.
+ Google Calendar+ iCal Export