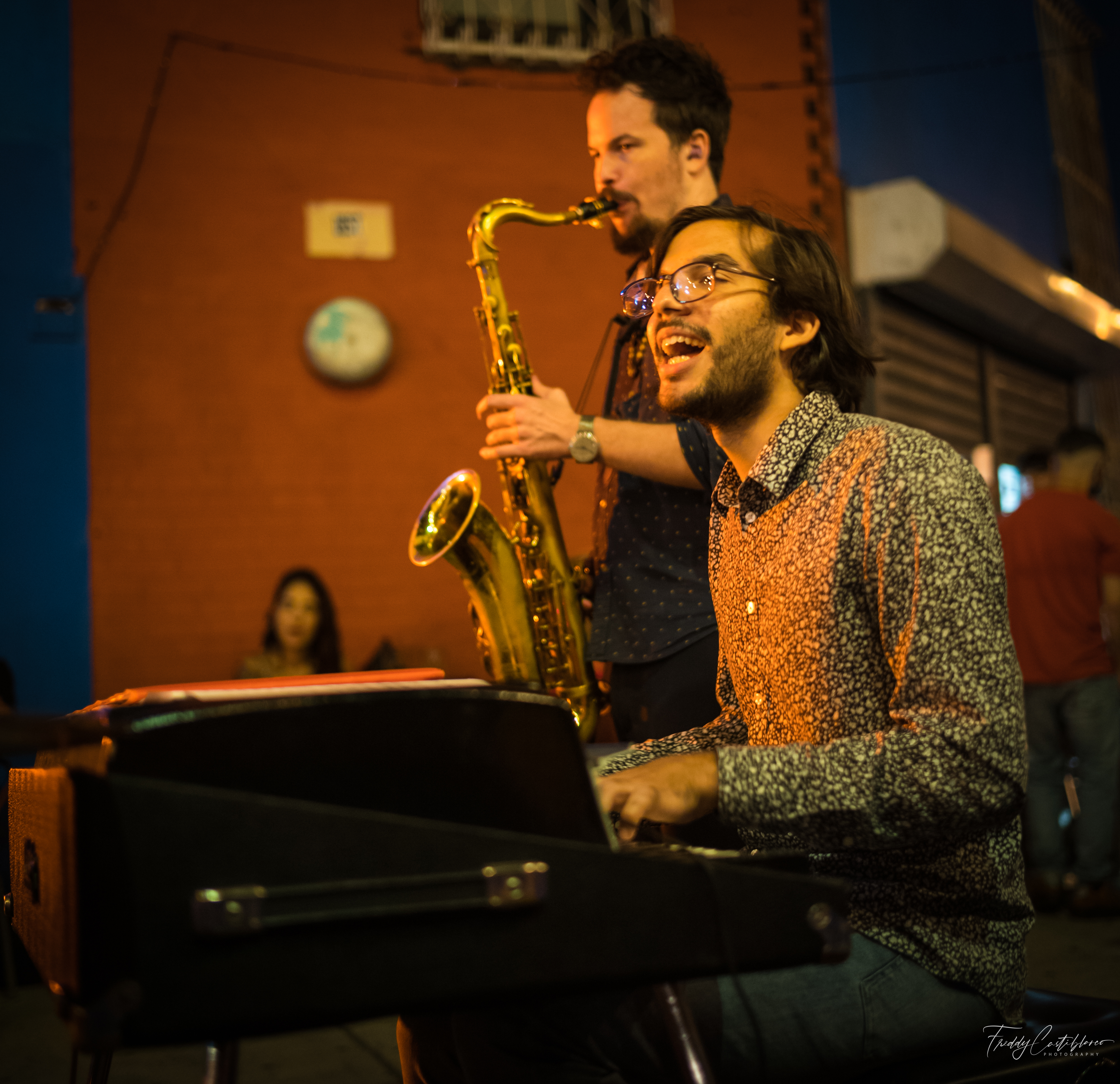 Gabriel Chakarji Trio
Presented by Terraza 7 Outdoor Concerts Series.
Thurday, October 1st, 2020 at 7:00 pm.
Donation suggested: $10.
Featuring:
Ari Hoenig / Drums.
Edward Perez / Bass.
Gabriel Chakarji / Piano.
On New Beginning, Pianist and Latin GRAMMY® nominee Gabriel Chakarji redefines the relationship between jazz and Afro-South American/Caribbean music with eight original and innovative compositions. Thematically, New Beginning is a rumination on the immigrant experience and identity.
Gabriel Chakarji’s story begins in Caracas, Venezuela, where his professional career began at age 16. Born into a musical family, Chakarji’s first professional gigs were in the church before he became deeply immersed in Afro-Venezuelan music. As a first-call musician, Chakarji was afforded the opportunity to play many different types of music such as Joropo and Merengue as well as Jazz and folkloric music with the likes of Aquiles Báez, C4 Trio, Gonzalo Teppa, and Linda Briceño. At the age of 21, Chakarji received a full scholarship to attend the New School for Jazz and Contemporary Music, thus beginning a new chapter in New York City.
The immigrant experience of Chakarji, who has lived in the United States since 2014, takes center stage on New Beginning as he reconciles his identity personally and as a musician. Chakarji ponders tough questions on New Beginning: “What does it mean to be Latin American? What does it mean to be Venezuelan? Am I more or less of what I am because I’m in the US as opposed to being in Venezuela?” Chakarji is part of a generation of musicians from the Venezuelan diaspora who have taken it upon themselves to understand South American folklore and how this artform fits within the large umbrella of jazz and improvised music in the United States.
“All my influences of South-American, Caribbean and Black-American music have one source in common: Africa,” Gabriel notes, adding, “we’re trying to bring out all the shared elements, the places where many musical traditions live together, instead of focusing on the genres and stereotypes. We need more of this spirit in a society that suffers from racism, prejudice, and wars. We want to create a space where music can shift paradigms.”
TRAVIS RODGERS JR THE JAZZ OWL “Gabriel Chakarji is a very young man with the heart and soul of a wizened Jazz master of our yesterdays. His compositions pay homage to his influences while his playing sounds like something yet to come. I remember thinking the same thoughts of a young Brad Meldau or Lyle Mays. Gabriel’s craftmanship promises that same bright future.”
Philadelphia native Ari Hoenig was exposed at an early age to a variety of musical experiences. His father is a conductor and classical singer, his mother a violinist and pianist. Accordingly, at 4 years of age, Ari began studying the violin and piano. He began playing drums at age twelve, and by age fourteen he was honing his skills with other young jazz musicians at Philly clubs such as Ortlieb’s Jazz Haus. He’s shared the stage with such artists as Herbie Hancock, Ivan Linz, Wynton Marsalis, Toots Thielemans, Dave Holland, Joe Lovano, Pat Metheny, and Gerry Mulligan among many others.
In 2016, Ari Released The Pauper and the Magician on AH-HA Records. It features the quintet of Shai Maestro on piano, Gilad Hekselman on guitar, Tivon Pennicott on Sax and Orlando Le Fleming on bass. On this record, Ari explores the link between storytelling and jazz by creating a soundtrack to the improvised and sometimes twisted stories he tells his two small children.
In 2018, Ari released a standards record called NY Standard on the Fresh Sound label. It is a tribute to playing standards in New York. The next record, Conner’s Days, is Also due to come out on the Fresh Sound label in 2019 and it features his current trio of Nitai Hershkovits and Or Bareket.
Besides the quintet, Ari leads 2 other groups which play his original music. Ari Hoenig Nonet and Trio. The Nonet performs Ari’s original compositions arranged by Noam Wiesenberg and features various high caliber players in the New York area. The trio is with Gilad Hekselman and Orlando le Flemming and has toured extensively in Europe, Japan, and South America. Ari also co-leads a variety of projects including Pilc, Mountain, Hoenig (“the three-headed monster”), jazz electronica project “Nasty Factorz” with Gael Horellou and various duo’s with Chris Potter, Edmar Casteñeda or DanWeiss.
About Edward Perez: Equally at home in a number of genres, Perez has shared the stage with jazz luminaries Lee Konitz, Kenny Werner, Lionel Loueke, Mark Murphy, and Mark Turner; Latin-jazz giants Paquito D’Rivera, Ignacio Berroa, Arturo O’Farrill and Hector Martignon; celebrated Afro-Peruvian musicians Eva Ayllón, Juan Medrano Cotito, and Julio “Chocolate” Algendones; Colombian songstress Lucia Pulido; Brazilian pianist Helio Alves and a host of others.
+ Google Calendar+ iCal Export