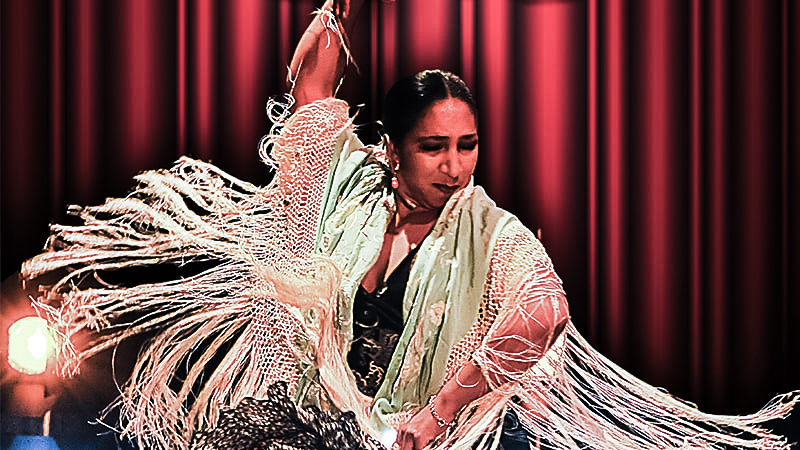 Elena Andújar was born in Seville, where she was brought up in an atmosphere in which flamenco was a way of life. She first studied and performed as a flamenco dancer, performing with Antonio Canales on his Japanese tour in 1990 with Ketama. But she soon became known as a flamenco singer after Joaquín Cortés asked her to sing in his shows Cibayi (1993) and Pasión Gitana (1994).

She has performed with her group in flamenco clubs like La Trocha (Seville), Café de Chinitas (Madrid), Casa Patas (Madrid), Tablao de Carmen (Barcelona), Zambra (Alicante) and Suristán (Madrid). She has starred with several groups in different cities in the United States and Europe, occasionally combining singing with dancing. She has also appeared in films like Taylor Hackford´s The Devil´s Advocate, dancing with Al Pacino, or as a singer in Mike Figgs´documentary Flamenco Women (VPRO, Holland and Channel 4, United Kingdom). Her face is very familiar to fans of photography for the portrait of Elena, which the famous photographer Richard Avedon included in his Autobiography. In Ghana, she participated in the Music on the Line concert, a project which culminated in London with the participation of such African musicians as Sibongile Khumalo, Amadou & Marian, Rex Omar, and Josephine Oniyama, as well as British musicians, including Steve Lodder. In London, she performed with her group at the Barbican Centre in July 2001.
Currently, she is director of her own flamenco school in Madrid, where in addition to singing and dance, classes are given in all aspects of flamenco.
The critic Álvarez Caballero wrote in El País: “One of the new figures who has most solidly established herself as a flamenco singer.”

Her singing, her real spontaneity, has been enjoyed in many flamenco fiestas, eventually leading, through her many collaborations, to her recognition by the general public. She participated as a singer in the Pata Negra album El Blues de la Frontera, and since then has worked with such artists as Romero San Juan, Arrajatabla, Diego Carrasco, Dulce Venganza, Cantores de Híspalis, Niña Pastori, Familia Fernández, etc

More recently, she has experimented with jazz, working with Jorge Pardo-Carles Benavent Flamenco All-Stars; with blues, with the Vargas Blues Band; with zarzuela in the Gala de Reyes at the Teatro Real; and as a soloist with the Metropolitan Orchestra de Utrecht (Holland) and the Kymi Sinfonietta of Helsinki (Finland).
Her first album was recorded in Milan and Madrid with the participation of pianist Walter Tesoriere, the flamenco singer Dieguito “El Cigala” among others.