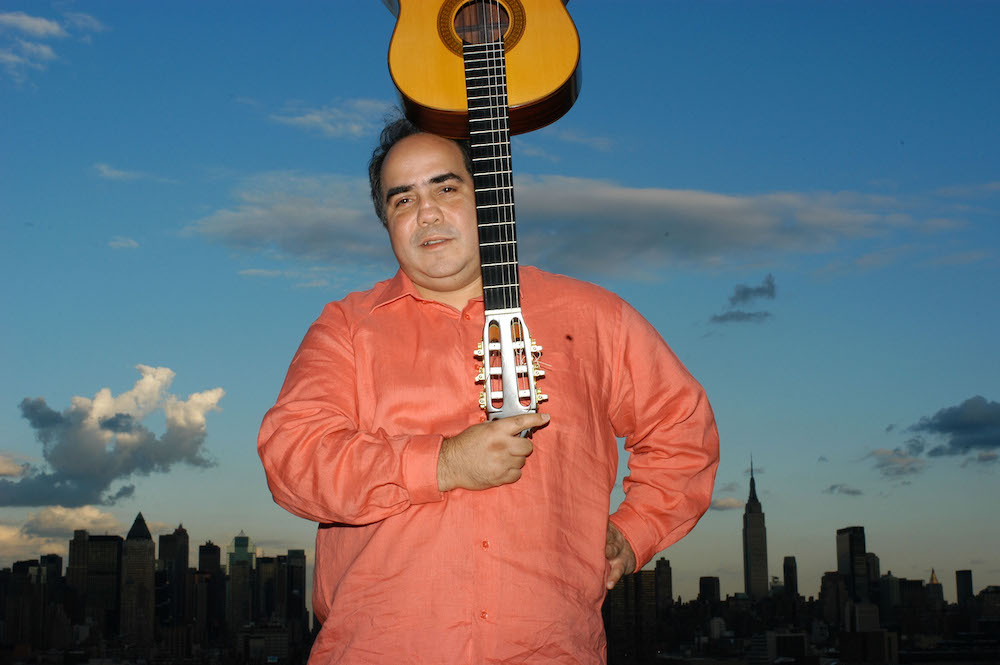 “Aquiles Baez Trio is one of the groups that are vanguard of the Venezuelan and Latin American contemporary music. This trio consists of three virtuosos and excellent musicians, that apparently they are a conventional jazz trio, but they are a sounds machinery. That is a musical journey through tradition and modernity. They are a machine of emotion and rhythm in every note, in every performance . Aquiles Baez on guitar, Adolfo Herrera on drums and Gustavo Marquez on bass, makes a inusual trio, a gear of various musical currents that flow in three musicians with experimental sounds completely organics and melodics. The original compositions of Baez are a masterpieces that build a window from the Caribbean to the perspective of the century XXI.. Aquiles Baez Trio represents the new music of Venezuela for the world”

Aquiles has successfully accomplished seventeen of his own record albums , along with numerous collaborations in the company of well-renowned artists such as Paquito D’ Rivera, Farred Haque, John Patitucci, Ilan Chester, Mike Marshall, Aquiles Machado, Ed Simon, Richard Bona, Giora Feidman, Raul Jaurena, Ensamble Gurrufio, Simon Diaz, Nana Vasconcelos, Luciana Souza, Lucia Pulido, Cecilia Todd, Worlds of Guitars, among others. He had also participated with major world orchestras such as the “Brooklyn Symphony “, “Ravinia Festival Orchestra”, “Boston Symphony”,”Atlanta Symphony”, “Simon Bolivar” and “Bach Academy”.Likewise, he has appeared in numerous documentaries such as Fernando Trueba´s “54 Street”, as well as Grammy nominated albums “Motherland” and “Central Avenue” featuring legendary pianist Danilo Perez and ” La Pasion segun San Marco” from composer Osvaldo Golijov.He had been also member of “America Contemporanea” collective with musicians of seven countries of south America conducted by the Brazilian pianist and composer Bemjamin Taubkin .Throughout his career, Baez has received a number of notorious awards. Among those included is the Venezuela’s national prize as musical arranger of the year, and the William Leavitt award from Berklee College of Music; along with a variety of prizes as movie, dance, and music theater composer.

Many friends / Many instruments.

No cover charge for musicians!!!