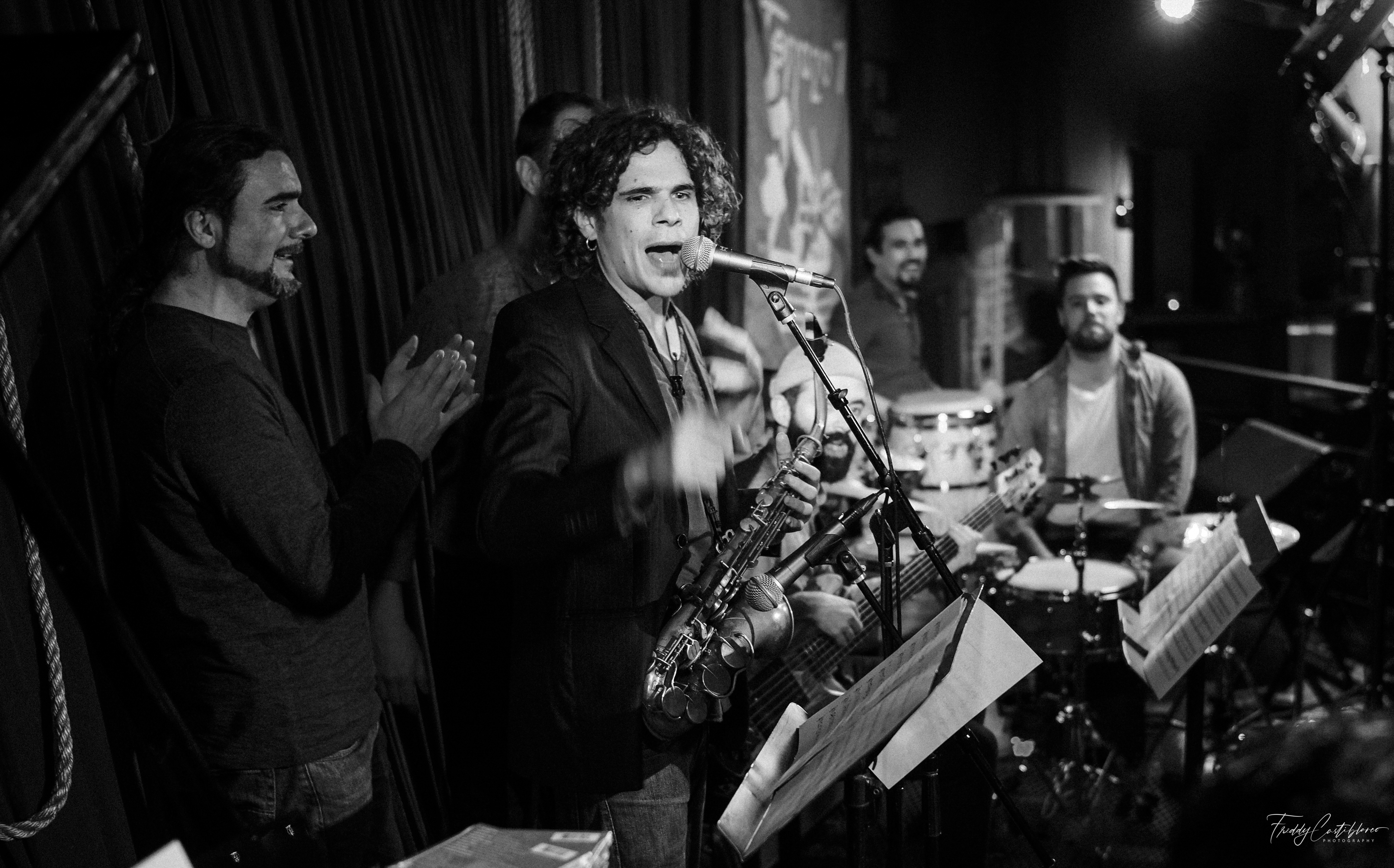 Antonio Lizana / Flamenco-Jazz at Terraza 7 on Saturday, February 29th, 2020. Starting at 9 pm
$15 Cover charge for mezzanine.
$10 suggested donation for the first floor.
FREE admission for CHILDREN 12 and under, with an adult over 21.
Featuring:
Guillermo Barrón / Cajon.
Alex Conde / Piano.
Manel Fortia / Bass.
Antonio Lizana / Sax; Voice and musical director.
Antonio Lizana is, above all, a saxophone player. I started playing this instrument at the age of 10 at the San Fernando Conservatory in Cádiz, but I first contacted with jazz a few years later when I attended several workshops by Jerry Berganza, Dick Oatts, Jim Snidero, and Perico Sambeat. In 2011 I finished his jazz studies at the Superior Center of Music of the Basque Country, where he started his own project, Antonio Lizana Group.
He was rewarded with the Cádiz Joven Award in recognition of his impact as an artist; He has taken part in the Miguel Blanco’s Afrodisian Orchestra (Satierismos 2011), where he plays the saxophone, sings, and is in charge of arrangements. He has collaborated on the last album by Arturo O’Farrill’s Big Band, which is based in New York, as a saxophone player, singer, and arranger is this album to Grammy winner as Best Instrumental Latin Jazz Album. Together with this big band, you’ve shared the stage with Andy & Jerry Gonzalez brothers, Dave Valentin, Papo Vázquez, Pablo Mayor, Cristina Pato, Ximo Tévar or Gregg Agust, among others.
All this baggage carry weight on the cosmopolitan sound that characterizes East, a name that, by the way, is not empty of meaning: on the likewise song, the Cádiz-born artist introduces new grooves and sounds from Eastern Europe that perfectly fit into the blend of the essential elements of his music, jazz, and flamenco. The album builds on the triangle made up of this extraordinarily magnetic song, the jazz-laden “Frontiers” and the flamenco sound on “I come Lost”; East travels around the world with the guidance of the instruments mastered by Lizana. “We Wanted So” or “Island of the Winds”, for example, militate in favor of the American genre songs like “Alegría Mari” encourage us to sing and dance flamenco.
Likewise, East sees Lizana evolve into a mature singer; to the point that now it’s even more difficult to distinguish between the sax player who sings and the singer who plays the saxophone. The artist Javier Ruibal claims that Antonio is a singer and a saxophonist at the same time and that he performs both roles with grace and consistency that is “almost impossible to imitate”. And he may be right.
+ Google Calendar+ iCal Export