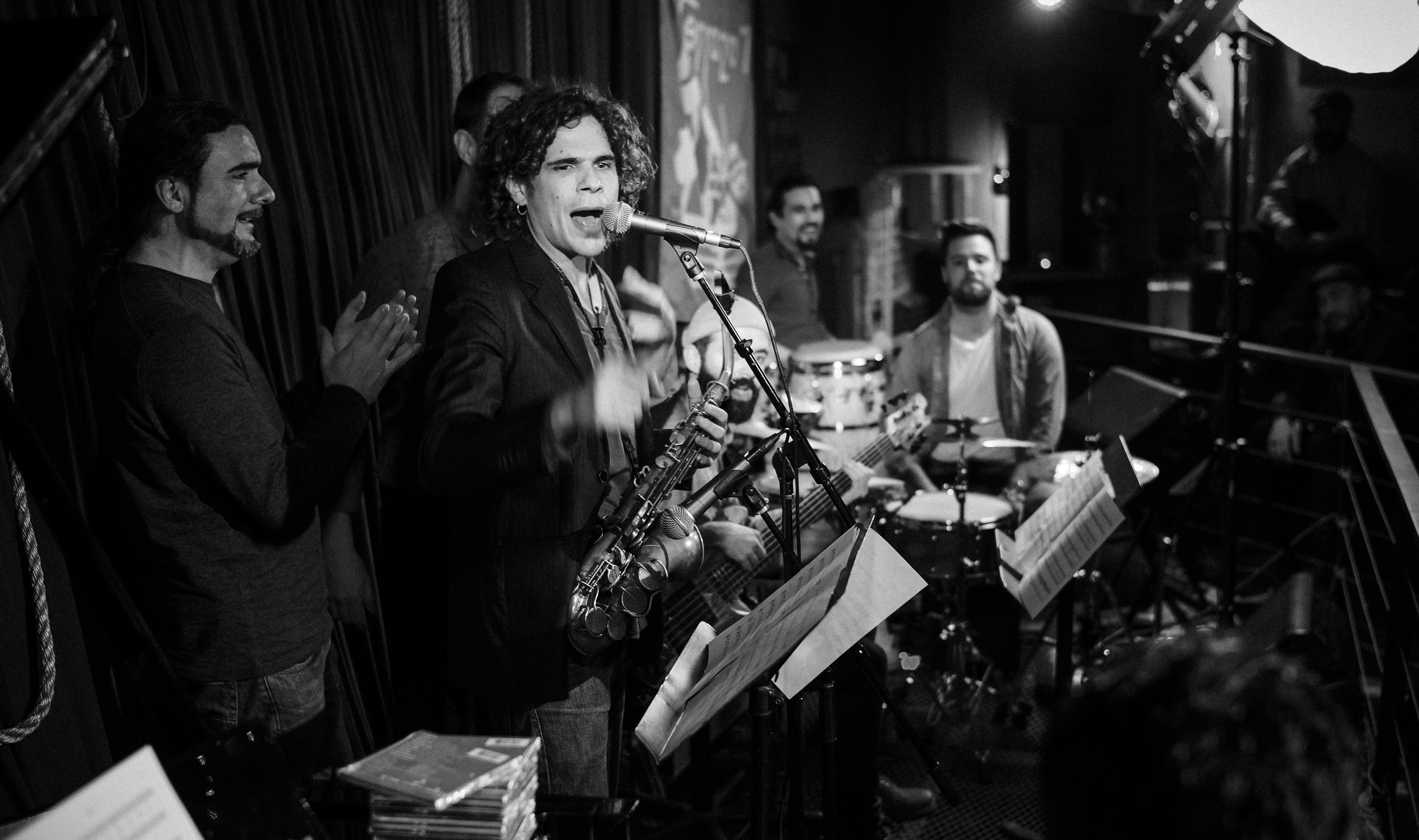 Flamenco music, with its passionate flourishes and virtuosic improvisation, has long captivated jazz musicians. Forged in the fires of classical, jazz and flamenco styles, pianist Alex Conde has emerged as one of the most versatile contemporary performers of jazz-flamenco fusion, dazzling audiences and earning rave reviews across the world.

In summer 2018, Conde performed original compositions with the Miami Symphony Orchestra, with the Dominique Farinacci and Christian Tamburr Quintet at the San Jose Jazz Festival, and “The Latin Side of Herbie Hancock” with the Conrad Herwig Sextet at the Russia Jazz Festival in Moscow.
Conde delivered these performances on the heels of recording his fourth album, “Origins” (2018, Ropeadope) with all stars Marcus Gilmore on drums, Luques Curtis on bass, Dayna Stephens on saxophone, Brian Lynch on trumpet, Conrad Herwig on trombone, John Benitez on electric bass, and gypsy singer Ismael Fernandez.

The album was released in May 2018 with an official presentation at the legendary Blue Note in NY, the Symphony Space on Broadway, and a collaboration at the Lehman
Performing Arts Center, alongside superstar flamenco singer Diego el Cigala, before a fantastic audience of flamenco and jazz lovers.

These performances are a mere handful among hundreds in a career that began in Conde’s childhood in Valencia, Spain. A recognized prodigy, Conde demonstrated perfect pitch at the age of four. His parents gave him his first keyboard, and encouraged him as he began taking formal piano instruction, and teaching himself. Conde practiced everything he heard from his father, Alejandro Conde, an acclaimed singer with more
than 20 albums to his name, and one of the foremost performers of Copla, the flamenco-infused song book of popular works.

As Conde and his playing matured, melding musicality and increasing technical proficiency, he began playing professionally alongside jazz musicians in Valencia Spain, In 2006 Conde came
to the United States, where he played with Wayne Shorter, John Patitucci, Ruben Blades and Chucho Valdés, and studied with trumpeter Mike Mossman, alto saxophonist Antonio Hart, pianist Jeb Patton, and the late multi-instrumentalist Jerry González.
In 2009, Conde met producer Fernando Brunet, with whom he released Jazz and Claps, an album featuring Alex original compositions along with international young artists such
as Magda Gianikou (Banda Magda) and Keita Ogawa (Snarky Puppy). The album was released with Contraseña Records and opened the path of jazz and flamenco and stamped the music of Alex Conde as a center and as a mature composer and arranger for small ensemble.

In 2013, Conde self-produced and released his second album, Barrio del Carmen, a collection of music composed and arranged for the flamenco companies for which he has composed music over the years. The album features flamenco stars including gypsy singer Kina Mendez, nephew of the great Paquera de Jerez, and guitarist Jose Luis Rodriguez, long-time musical director for Cristina Hoyos. The album became a classic on TV programs such as Television Castilla la Mancha, presented by Rocío Sañudo, and in flamenco dance classes, where it is prized for its musicality and structure, which
makes it ideal for study.

Today, Conde has become one of his generation’s pivotal figures in flamenco piano. With a fluid technique, an innovative tonal palette, and an extensive repertoire, he plays with the passion of a young artist and the command of a seasoned veteran, and remains in constant demand as both a studio artist and a performer.

‘‘… Origins is a tremendous calling card for Alex Conde as composer and pianist. But it’s also a demonstration of the adaptability of Latin jazz, as the genre readily accepts
Conde’s flamenco influences. Easily recommended to Latin jazz fans, with the additional spice of a fresh Spanish flavor.”
— MARK SULLIVAN, ALLABOUTJAZZ

“… When Alex Conde turns up the power at any given time, he’s like an orchestra all by himself. All of this firepower together with Marcus Gilmore, Conrad Herwig, Dayna Stephens and Luques Curtis makes Origins a very special experience. Mr. Conde is a pianist whose music is sustained by the fecundity of his Spanish roots. Through it all, of course, Mr. Conde is absolutely thrilling.”
— RAUL DA GAMA, LATIN JAZZ NETWORK

‘‘… [Alex’s] assist with new truly marvelous piano interpretation and arrangements in new tantalizing ways to Monk’s music. I can imagine Monk tipping one of his many now famous hats to him.”
— JOHN EPHLAND, DOWNBEAT MAGAZINE.

“… Gifted Spanish pianist Alex Conde, has his way with the high priest of bop in an adventurous all-Monk program.’’
— JAZZ CRITIC BILL MILKOWSKI

‘‘… [Alex’s] Thelonious Monk is rock solid. Its rhapsodic elegance is informed by all of the mystery and majesty of Monkish-ness. The elemental irreverence of Monk-music has
been mastered by the young Spaniard. He worships at the altar of originality, as Thelonious Monk did, pouring his twisting duende into molten chords. His phrases make for lines that erupt with volcanic brilliance and a viscosity that is unlike anything that has been sung of Thelonious Monk in a very long time.”
— RAUL DA GAMA, LATIN JAZZ NETWORK

“… I have the honor of being part of this wonderful project. If you know Alex, you know what I’m talkin’ about. If not, you need to check him out. He’s a virtuoso pianist from Spain, and has prepared some extremely hip arrangements of classic and off-the-beaten-path Monk compositions — just when you thought you’ve heard Monk every way possible. The intimate setting and the sparkling musicianship of my colleagues is a ripe combination. The brand new CD, Descarga For Monk, is a killer, but the material is most playful and profound in a live situation.”
— SEVEN-TIME GRAMMY AWARD-NOMINATED ARTIST JOHN SANTOS

In 2011 finished the higher studies of Jazz in the Superior center of music of the Basque Country, Musikene, where he has as professors Mikel Andueza, Guillermo Klein, Jordi Rossi, Bob Sands, Miguel Blanco, Sambeat Perico, Andrej Olejnizak and Guillermo McGill among others. It is during his stay in the Basque Country where his own project is born, Antonio Lizana Group, to which he is currently dedicated, and with which he has played in numerous jazz festivals such as San Sebastian, Jazz 1906, 365 Jazz Bilbao , Jazzymás Canarias, Sherry Jazz Jerez, Rotating Por Salas …

He has recently been awarded the Cádiz Joven prize in the field of art, in recognition of his projection.

He has participated with the Afrodisian Orchestra of Miguel Blanco (Satierismos 2011) where he intervenes as a saxophonist, arranger and cantaor.

He also collaborates with the Afro-Latin-jazz Orchestra of Arturo O’farrill, based in New York, as a singer and saxophonist, in whose last album he has collaborated, and with which they have won a Grammy for the best Latin album instrumental jazz. With this Big Band he has shared the stage with the brothers Andy and Jerry González, Dave Valentin, Papo Vázquez, Pablo Mayor, Cristina Pato, Ximo Tévar, Gregg Agust, among others …

Antonio Lizana is, above all, a saxophone player. I started playing this instrument at the age of 10 at the San Fernando Conservatory in Cádiz, but I first contacted with jazz a few years later when I attended several workshops by Jerry Berganza, Dick Oatts, Jim Snidero and Perico Sambeat. In 2011 I finished his jazz studies at the Superior Center of Music of the Basque Country, where he started his own project, Antonio Lizana Group.

He was rewarded with the Cádiz Joven Award in recognition of his impact as an artist; He has taken part in the Miguel Blanco’s Afrodisian Orchestra (Satierismos 2011), where he plays the saxophone, sings, and is in charge of arrangements. He has collaborated on the last album by Arturo O’Farrill’s Big Band, which is based in New York, as a saxophone player, singer and arranger, being this album to Grammy winner as Best Instrumental Latin Jazz Album. Together with this big band you’ve shared the stage with Andy & Jerry Gonzalez brothers, Dave Valentin, Papo Vázquez, Pablo Mayor, Cristina Pato, Ximo Tévar or Gregg Agust, among others.

All this baggage carry weight on the cosmopolitan sound that characterizes East , a name that, by the way, is not empty of meaning: on the likewise song, the Cádiz-born artist introduces new grooves and sounds from Eastern Europe that perfectly fit into The blend of the essential elements of his music, jazz and flamenco. The album builds on the triangle made up of this extraordinarily magnetic song, the jazz-laden “Frontiers” and the flamenco sound on “I come Lost”; East travels around the world with the guidance of the instruments mastered by Lizana. “We Wanted So” or “Island of the Winds”, for example, militate in favor of the American genre songs like “Alegría Mari” encourage us to sing and dance flamenco.

Likewise, East sees Lizana evolve into a mature singer; to the point that now it’s even more difficult to distinguish between the sax player who sings and the singer who plays the saxophone. The artist Javier Ruibal claims that Antonio is a singer AND a saxophonist at the same time, and that he performs both roles with a grace and consistency that is “almost impossible to imitate”. And he may be right.