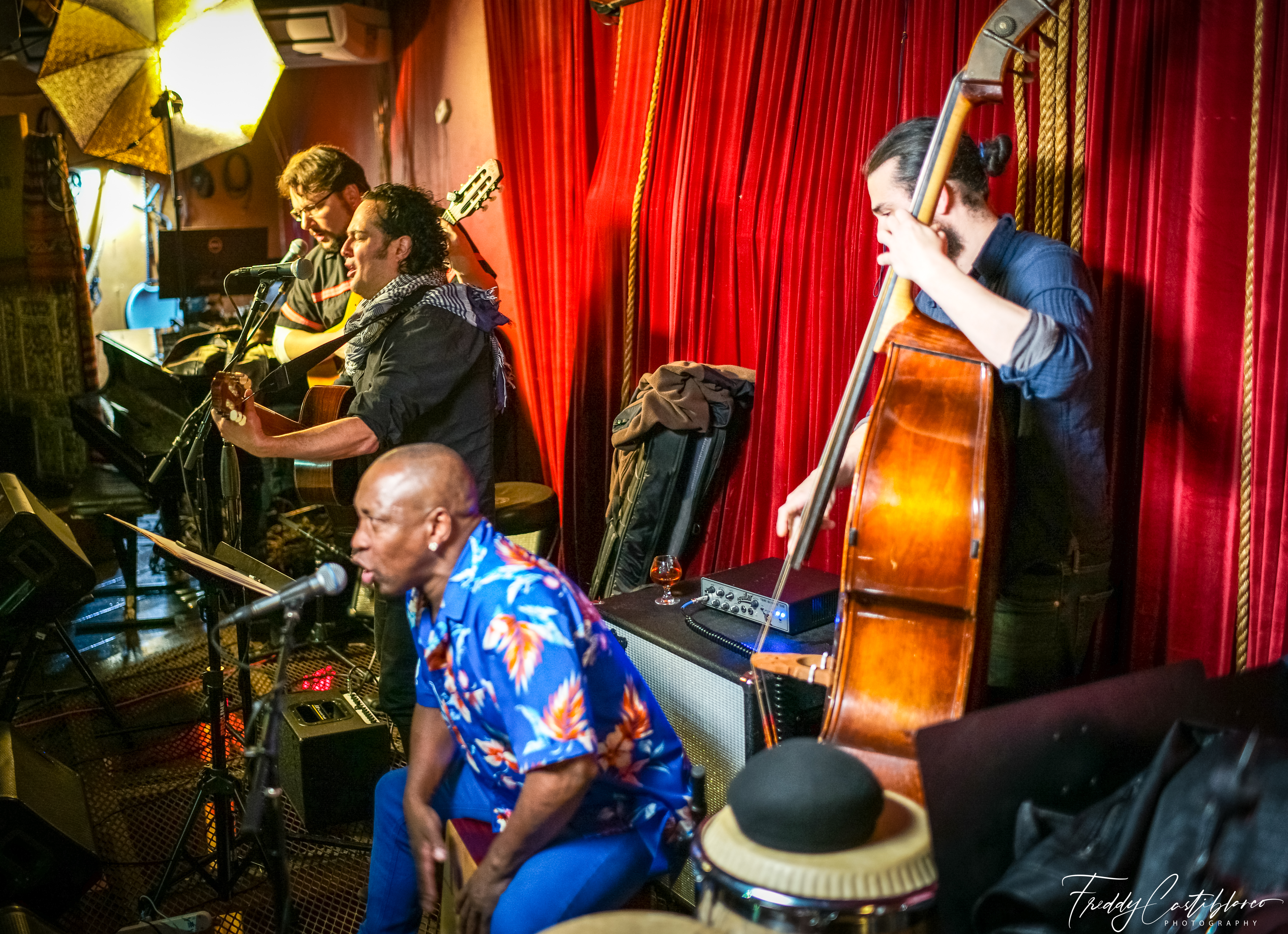 Freddy “Huevito” Lobaton:
“Huevito” was born and raised in Lima, Peru, with a father who led a highly respected Afro-Peruvian music and dance troupe, Huevito learned the rhythms, and the cajón, at a very young age.
He is also a three-time winner of Peru’s national zapateo fancy footwork contest. Huevito has toured North and South America with his percussion and his zapateo.
Freddy “Huevito” Lobatón – percussion / Zapateo dancing Master percussionist and zapateo dancer Freddy “Huevito” Lobatón is from Pamplona Alta, Lima, Peru. He has performed and toured internationally with Afro-Peruvian music luminaries and played and composed for Eva Ayllón, Per Negro, Lucila Campos, Guajaja and la Peña Don Porfirio. A member of Per’s legendary Lobatón family, he began developing his skills at the age of four watching his father’s dance troupe rehearse in their living room. Lobatón is considered the world’s leading authority on Peruvian zapateo dancing and one of the most virtuosic percussionists of his generation. His distinctive approach to the cajón, Quijada (jawbone) and cajita In a jazz context has made him a pioneer among Afro-Peruvian percussionists.

Eric Kurimski:
He is New York’s most sought-after guitarist for Afro Peruvian music and a favorite at Terraza 7. In 2002, after years of studying and performing Jazz, he began intense research of Afro Peruvian rhythms with the esteemed guitarist, the maestro Carlos Hayre (Carlos has influenced and modernized the advancement of Afro-Peruvian music from the 1940s through the present day.) Carlos became Eric’s professor/ mentor and has proved to be very important to his musical career. Now, fusing his knowledge of Jazz with rhythms of Peru and Latin America, Eric has dedicated himself to defining a new sound integrating the Peruvian Cajon (box) as the principal percussion instrument in a Jazz setting. The spectacular playing and skillful blend of acoustic and electric tones bring authority to this brilliant co-mingling of (jazz and Afro Peruvian) traditions that are, after all, rooted in the same musical heritage.

Nilko Andreas Guarin:
Classical Guitarist and Composer Nilko Andreas Guarin has been praised as an “electrifying performer for his powerful stage presence and spontaneity that grows irresistible.” Since his Carnegie Hall debut in 2009 Nilko Andreas has been captivating audiences on three continents as a soloist and chamber musician. Awarded several awards, including “The Recognition Award” by the City of New York for his contributions to the Arts. Born in Colombia, Nilko Andreas is of great interest for the composers of Latin America, constantly commissioning and premiering new works. He has given master classes at the Mannes guitar seminar in NY, Brazil, France and Colombia; he has also given a Lecture/Presentation on Colombian Classical Music at Columbia University, He has recorded music with multi-platinum artists and composed music for film and theater. He holds a BM and an MM from The Manhattan School of Music. Recently he performed “Concierto de Aranjuez” in China with the Shenzhen Philharmonic under Mto Henry Van de Velde. Upcoming engagements include “Aranjuez” in Jakarta Indonesia, with the Surabaya Symphonic Orchestra, Manuel Ponce’s “Concierto del Sur” with the Baja California Symphonic Orchestra, a European tour with Austrian Violist Firmian Lermer during the 2018 season, solo concerts in Indonesia, Germany, Colombia and Poland, as well as performing at Carnegie Hall as part as the “Amazonas” Concert series in 2017 He is the Artistic Director at AZLO productions and the Latin-American Chamber Music Society of New York.